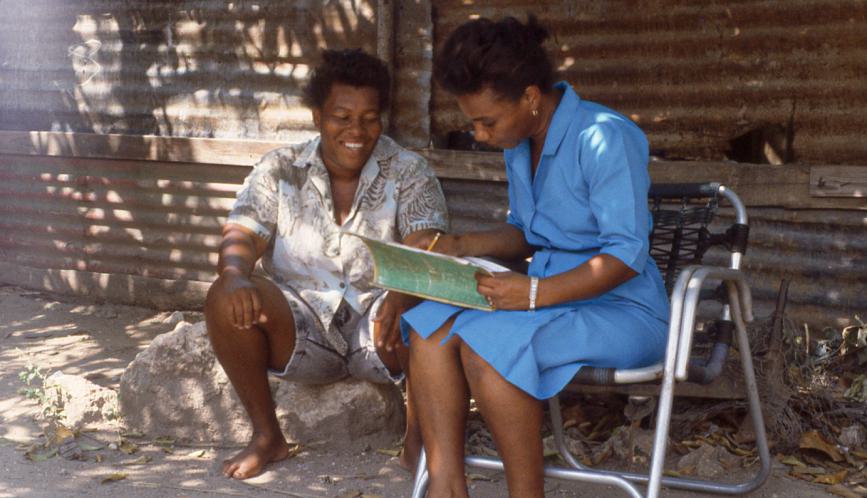 Throughout the world, parents in poverty often struggle to make sure their children are safe and fed. Overwhelmed parents focused on those needs may not realize the importance of providing intellectual stimulation starting in a baby’s earliest days. That stimulation sets the foundation for brain development, learning, and success later in life.

A home visiting program that supports parents and coaches them on how to engage their babies and toddlers can have broad-ranging positive effects that last into adulthood, a recently published study showed.

The study assessed adults now in their 30s who, as infants and toddlers, were part of an early intervention study in Jamaica. Children ages 9 to 24 months living in poor neighborhoods whose growth was below normal ranges were randomly assigned to receive stimulation via home visit from a trained childcare worker, nutritional support, or both. In this latest evaluation in the long-running study, a research team located 75% of the original 127 participants and measured their IQ, executive function, mental health, psychosocial skills, personality traits and risk behaviors.

Those who received stimulation (with or without nutritional support) as young children showed significantly greater IQ and cognitive flexibility, better mental health and psychosocial skills, and fewer risk behaviors as adults, compared with a group that did not receive these interventions. Earlier gains in educational attainment were reported previously. Findings were published in “Cognitive, psychosocial, and behaviour gains at age 31 years from the Jamaica early childhood stimulation trial” in the Journal of Child Psychology and Psychiatry.

“The important finding is the breadth of benefits from early childhood intervention,” noted principal author Susan P. Walker of the Caribbean Institute for Health Research at The University of the West Indies. “It’s not just IQ. It’s better mental health, psychosocial skills, behavioral outcomes—it’s all the other skills where those in the treatment group continue to show benefits compared to the no-treatment group that are impressive.” Researchers found 18 significant outcomes of 33 assessed.

"We know that early stimulation and nutrition are really important. The lesson from this study is that if you work with parents, they can really make a difference for their children from early on,” Walker noted. “Jamaican children go to preschool at age 3, but below age 3, there is less recognition of the importance of stimulating learning. Parents often don’t recognize that they have this capacity to help their children’s early development. If you help parents, they can do these things really well."

While the long-term effects of early childhood intervention have been well-studied in the United States and other advanced economies, there is little evidence on the long-term benefits of early childhood interventions in low-and middle-income countries. Walker and colleagues filled that gap, following and assessing participants at 7, 11, 17 and 22 years of age. The objective of this follow-up at age 31 was to see if benefits such as better executive function, reduced risk behaviors and other measures that influence well-being  persisted into an age when adult traits may be more established. A separate working paper from lead author Paul Gertler reporting on labor outcomes for study participants is now available as a World Bank working paper.

One notable finding in this paper is that a comparison group of children whose growth was in the normal range had higher IQs than both the treatment and control groups who started life with delayed growth. Even with treatment, “there was still a sizeable gap between the stunted and normal growth group,” Walker said. “It shows that intervention can make a substantial gain in IQ but can’t completely erase that gap over time. That adds to the evidence of the importance of intervention, to avoid stunting in the first place.”

However, she noted, “While IQ was different, on other measures like psychosocial, mental health and behavioral factors, there were no differences between the treatment and comparison groups. The treatment group had made substantial gains in those areas, and some would argue those things are just as important—or more important—than IQ.”

Following participants and the comparison group over three decades and collecting data through a battery of tests is a daunting task. Locating and assessing participants who had migrated added to the challenge. Walker credits maintaining good relationships with families and study subjects for the high rate of continued participation.

Coauthoring the paper were Susan M. Chang and Amika S. Wright of the Caribbean Institute for Health Research at The University of the West Indies; Sally M. Grantham-McGregor of the Institute of Child Health, University College London; Rodrigo Pinto of the University of California at Los Angeles Department of Economics; and James J. Heckman of the Center for the Economics of Human Development at the University of Chicago.

Walker notes with a laugh that when she first joined the study team to contribute her expertise on nutrition, she had no idea she would still be following the participants 30 years later. After the initial findings were published, “there was interest in what we found and momentum to seek funding,” she said. The study has been supported by the Ford Foundation and, more recently, by the World Bank’s Strategic Impact Evaluation Fund.

“We’re fortunate to have a team that has held together over the years. Sally, Susan Chang and I were there from the beginning, and there were others at the start or who joined later who made new contributions,” Walker said.

“The big challenge people are working on now is how you take it and make it a national program done well at a large scale, and to find the resources. This study has helped make the case for that.”

The home visiting intervention has been used in 18 countries, in some cases as a national program. It has also been adapted for parent groups and day care centers in India, Bangladesh and Colombia, and for refugee/displaced populations in Jordan, Lebanon and Syria by the International Rescue committee.