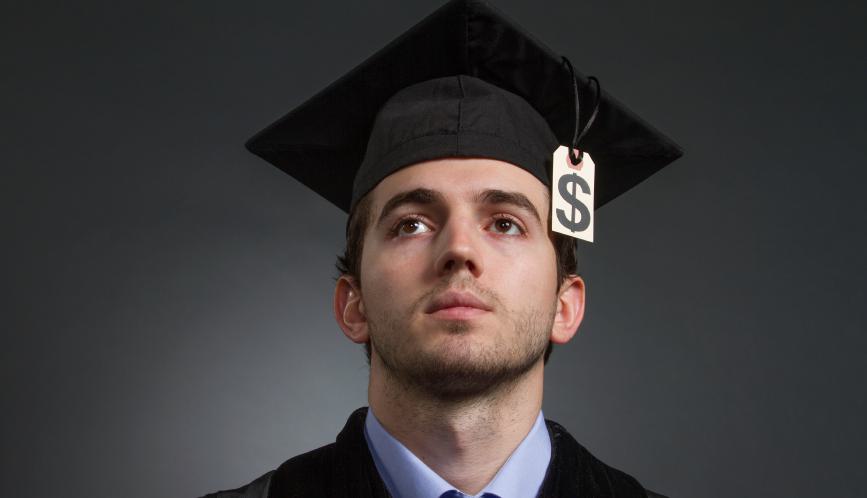 Man wearing graduation attire with a dollar sign hanging from his cap.

HCEO asked Professor Miguel Palacios (Vanderbilt University) to weigh in on some of the key questions surrounding Oregon’s new “Pay It Forward” college tuition proposal. Professor Palacios is an expert on human capital contacts, both in theory and practice: he is the author of Investing In Human Capital (Cambridge University Press, 2004) and co-founder of Lumni Inc, a firm that finances students using Human Capital Contracts since 2002. He holds a Ph.D. in Business Administration-finance-and an M.A. in Economics from the University of California, Berkeley, an M.B.A. from the Darden Business School, University of Virginia, and a B.S. in Mechanical Engineering from the Universidad de los Andes, Colombia.

HCEO: Recently Oregon students and legislators have proposed a new tuition pay-back plan (which is being called a “free” tuition plan) for public universities. The plan has ignited a pretty rigorous debate on the merits of the plan and potential shortcomings. Daniel Luzer of Washington Monthly, for example, has argued that delaying the debt may actually make it easier for colleges to hike tuition and fees, and that a plan like this just shifts the debt rather than solves the problem. Is there theory or evidence that corroborates any of these concerns?

MP: This is a complicated question because it mixes two issues, 1) who pays for college, and 2) if students pay, what financing mechanism should be used? Pay it Forward (PIF) shifts obligations from the state to students, a problem for those who think college should be paid by the state, and a good thing for those who think students should pay for college. Also, as I explain below, PIF increases tuition for some students, and reduces it for others. Whether “it solves the problem” depends on what “the problem” is. If the problem is that students should not have to pay for higher education, then PIF does not solve the problem. If the problem is that the students’ burden of paying for higher education is unmanageable, then PIF does solve that problem.

HCEO: How does this plan reflect or differ from Friedman’s original idea, which you call in your book a “Human Capital Contract”?

MP: The essential elements of Friedman’s original idea were: 1) income-contingent payments, 2) paid during a fixed period of time, 3) funded by private investors. Oregon’s “Pay it Forward” (PIF) plan takes the first two elements, but lets the state take the role of the investor.
The PIF arrangement allows the student to pay a percentage of their income during a fixed period of time. As long as the percentage of income is not so high that it distorts the graduate’s willingness to work, this arrangement is far superior to a loan because it offloads some of the risk of the investment in education from the student to the investor. Ideally that is the benefit PIF would provide to Oregon’s graduates.
However, the source of the funding is not innocuous. Whereas in Friedman’s idea students are financed by private investors, in PIF the state provides the funding. Private funding matters because investors would perform an underwriting process when deciding whether or not, and on what terms, to finance a student. For example, a private investor might decide to fund a history major at the University of Oregon asking 4% of income during 25 years, while asking 2% of income during the same period from an engineering student at Oregon State University. Oregon’s plan, as reported in the press, intends to offer identical terms to all students, ignoring information that predicts future earnings, like the institution they attend and their field of study. Thus, the expected value of a graduate’s payments will be much larger for those who expect large incomes upon graduation than for those who expect lower incomes. This is politically easier, but, paradoxically, it means that by offering the same terms to all students Oregon is in effect asking a very high tuition fee from some students and a very low one from others, thereby creating a strong incentive for those facing a high “effective tuition fee” to go elsewhere. The predictable result is that PIF will generate lower payments to Oregon than planned.

HCEO: How does Oregon’s plan differ from other plans with which it has been compared?

MP: In other programs with which PIF has been compared, students pay a percentage of their income each period. This is the one feature of Friedman’s original idea that stuck. The main such program is Australia’s Higher Education Contribution Scheme (HECS), which was pioneered in 1989. Since then many other countries, including New Zealand, the U.K., and the U.S., have followed its example. However, in these income-contingent programs students carry a balance — in effect turning them into loans, thus their name “income-contingent loans” — and their payments stop when the balance drops to zero. In contrast, students do not owe a known amount under PIF and their payments continue regardless of whether the sum of the payments is higher than the financing received. This makes PIF a policy innovation because it retains what was an important feature of Friedman’s original idea.

Oregon’s PIF has also been compared with Yale’s Tuition Postponement Program (TPP), which did not end well. Yale’s program was also an income-contingent loan, but had an additional feature: a student’s payments depended on what others paid. This feature was a recipe for disaster since students who fulfilled their obligations had to pay for those who defaulted. Unsurprisingly alumni eventually rebelled — 20 plus years after being financed — and Yale had to capitulate. Oregon’s PIF does not share this feature with Yale, so Yale’s TPP failure is not indicative of PIF’s future success.

HCEO: If the Oregon plan were to pass, what kinds of conditions would affect its “success?”

MP: PIF’s success will depend on being able to collect efficiently while not distorting the decisions students make regarding whether or not to attend Oregon’s public universities. As I explained in the previous question, however, the current plan does distort students’ decisions. As for collection costs, Australia’s HECS provides evidence that collection can be done at a very low cost, provided a government-led income-withholding mechanism is in place. In PIF’s case this means the plan’s success increases significantly if the federal government agrees to collect the extra 3% on behalf of Oregon.

HCEO: Is there strong evidence on whether such contracts are “effective,” or would you say this is a novel opportunity to study the human capital contract in action?

MP: Limited evidence exists on the “effectiveness” of human capital contracts because they are relatively new. The oldest I am aware of was signed in 1999 by the now defunct company MyRichUncle. Since then several companies have led private efforts. The oldest existing company is Lumni, of which I am co-founder, having signed its first contract in Chile in 2002. Others include CareerConcept and Deutch Bildung in Germany, and more recently Pave and Upstart in the US. Yet, because the contract’s lifecycle is long (many years of funding, and then many years of repayment) solid evidence will take some time to become available.
Oregon’s PIF would be a novel opportunity to study a government-led human capital contract, albeit one that forfeits the benefits of underwriting. In particular, unlike a privately funded human capital contract, Oregon’s PIF would not yield information about future labor income prospects of graduates attending different universities and pursuing different types of degrees. This information can play a key component in reigning in college costs. But that is the subject of another blog.