Changing Business Cycles: The Role of Women’s Employment
Research Spotlight: Credit Growth and the Financial Crisis: A New Narrative
Gender and Dynamic Agency: Theory and Evidence on the Compensation of Top Executives 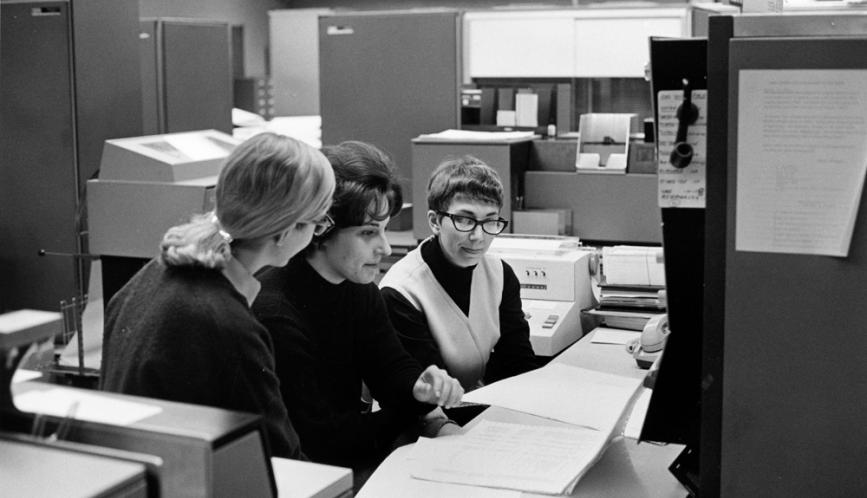 Changing trends in women’s employment have had significant effects on the performance of the U.S. economy, according to new research from FI network member Stefania Albanesi.

In a new HCEO working paper, Albanesi writes that in the business cycle literature, gender variation has rarely been taken into account. “Changing Business Cycles: The Role of Women’s Employment” helps fill this gap by looking at the impact of changing trends in female labor supply on productivity, total-factor productivity (TFP) growth, and aggregate business cycles.

The paper proposes that the rise in women’s labor force participation throughout the 1970s and 1980s, and its slowing down since the early 1990s, can help explain three puzzling phenomena that have changed the behavior of the U.S. economy: “i) the slowdown in productivity growth in the 1970s and the decline in the cyclical correlation between aggregate per capita hours and productivity; ii) the decline in the cyclicality of output and aggregate hours starting in the early 1980s, known as the great moderation; and iii) the sluggish growth in employment in the aftermath of recessions starting in the early 1990s, often referred to as jobless recoveries.”

To do this, Albanesi first uses micro data from the Current Population Survey to construct time series for hours per capita and hourly wages by gender. “Using a series of decompositions and counterfactuals, we empirically assess the role of the changing trend in female employment,” the paper notes.

She then develops a model to think about the productivity dynamics, the great moderation and the jobless recovery. The paper shows that growth in female hours and relative productivity, from the mid-1970s through 2003, had a sizable positive effect on TFP growth beginning in the 1980s. It also shows “that female hours display substantially lower cyclicality than male hours, and the growth in the female share of aggregate hours plays a large role in the decline in the cyclicality of aggregate hours during the great moderation.” The cyclical behavior of male employment and hours remained stable.

This started to change with the 1991 recession, when the cyclical behavior of female and male hours and employment converged. In other words, women now experience declines in employment and hours during recessions that are still smaller than men’s though their hours recover at a rate similar to men’s. “We show that this change in the behavior of female hours can account for most of the joblessness of the recovery from the 1991 and 2001 recession, and about half of the missing job growth after the 2007-2009 recession,” the paper notes.

“The calibrated model shows that if women’s participation hadn’t grown so much, on the one hand, average labor productivity growth would have been higher in the 70s and 80s, since the women entering the labor force at the time tended to be young and have relatively low educational attainment, decreasing productivity. But as work experience and years of schooling for women in the labor force subsequently increased, their contribution to average labor productivity turned positive starting in the 1990s. On the other hand, TFP growth would have been lower throughout the entire period, and particularly at the end when women’s relative productivity is quite high,” Albanesi says.

In the second part of the paper, the author estimates her model with Bayesian methods, and uses it to run counterfactuals to think about what we can learn by allowing for gender differences. She estimates the model in two periods: when female participation continues to grow and the period in which it’s flat. For the flat period, she forces “the process that drives female labor supply and female relative productivity to be the same as in the period where female labor supply was growing.” Then she assesses the behavior of the economic outcomes, such as GDP, male and female wages, male labor supply, and aggregate hours.

“What is interesting is that indeed, if female hours had continued to grow we would have seen a continued growth in aggregate hours, much smaller recessions in 1991, in 2001, and in 2007/09, and much faster recoveries,” Albanesi says. “But what’s really interesting is the other effects. GDP growth would have also been higher, and there would have been a smaller reduction in GDP in each of the recessions. And actually men’s wages would have been much higher, because if women have higher hours, the marginal productivity of male labor goes up.”

These findings show how important it is to take gender into account when analyzing business cycle models. “Taken together, these findings suggest that a DSGE model of the U.S. economy for the post-war period that does not include gender specific shocks to labor supply and productivity is misspecified, and may lead to faulty inference on the source of economic fluctuations,” the paper notes.

“Because women are half of the population, if their behavior changes, it does have very large aggregate effects,” Albanesi says. “If we don’t take this into account and we write down a simple model that doesn’t have gender variation, we’re going to miss a lot of the forces that matter over the business cycle.”

In future research, Albanesi hopes to show that not only will you have a richer model if you include gender variation, but also that the economy behaves differently when these factors are taken into account. “If you ask the classic policy questions that people ask using these models, you are going to get different answers from a model that has gender variation, in this very, very simple way,” she says.