Does Eviction Cause Poverty? Quasi-Experimental Evidence from Cook County, IL
John Eric Humphries on the Causal Impact of Evictions 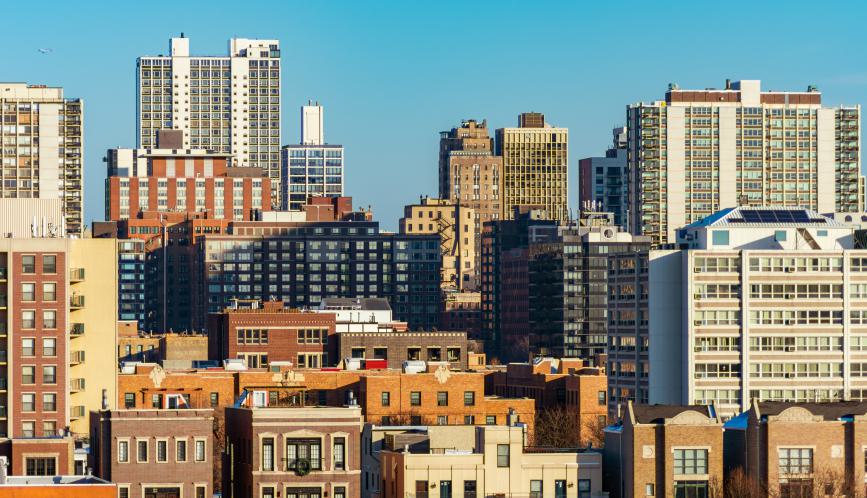 In the past several years, increasing attention has been paid to the lack of affordable housing across the U.S. According to a Pew Trusts report, more than one third of renting households were “rent burdened” or “severely rent burdened” in 2015, meaning they spent 30 percent or more of their income on rent. This growing interest in the rental market stems in large part from the groundbreaking work of HCEO network member Matthew Desmond, whose 2016 book Evicted: Poverty and Profit in the American City, highlighted the difficulties that poor households face in trying to secure safe and affordable housing.

A new study by MIP network member John Eric Humphries and his co-authors Nicholas Mader, Daniel Tannenbaum, and Winnie van Dijk sheds new light on the causes and consequences of evictions. “We were interested in the potential for large-scale collection of data on eviction court cases to complement the research that had so far been based on surveys and ethnographic work,” van Dijk says. “There’s been a lot of attention paid to evictions in the popular press, but both policy makers and researchers are still in the process of learning about what’s driving evictions and the impact of evictions on tenants in eviction court.”

In their recent HCEO working paper, the authors gathered 17 years of data from eviction court cases in Cook County, Illinois (which includes Chicago) linked to other administrative data sets in order to examine the causal effect of evictions on the financial circumstances of low-income families. “Local governments are thinking about introducing eviction prevention policies in response to the high eviction rates in poor neighborhoods,” van Dijk says. “The extent to which an eviction is causing adverse outcomes for renters determines whether or not it is sufficient to focus policy attention on averting the eviction once a tenant is facing a case in court. Many tenants end up in eviction court after a deterioration in their financial circumstances, and averting the eviction may do little to improve those circumstances.”

The authors link the Cook County court cases to data from credit bureaus and payday loans both before and after the eviction case filing. This allows them to get a clear picture of the financial situation of each tenant. The paper notes that eviction “negatively impacts credit access, credit scores, and durable consumption for several years, and increases debt in collections.” Though when compared to the financial strain that both evicted and non-evicted tenants experience before their case goes to court, the authors find that the eviction plays a small role in the broader financial distress of defendants. For example, they write,“[the estimate] for total debt in collections 13 to 36 months after the case is $209 and statistically insignificant, yet both groups have, on average, approximately $3,000 dollars in collection four years prior to the case.”

Thirty to forty thousand evictions cases are filed every year in Cook County, with most concentrated in low-income neighborhoods. The authors find that over “44 percent of evictions occur in census tracts with more than 20 percent of residents living below the poverty line.” Most tenants in eviction court do not have legal representation, while about 75 percent of landlords do. About two-thirds of these cases result in an eviction. The authors note that “Cook County’s institutional environment is similar to most American cities, though potentially less representative of some large cities with more heavily regulated rental markets.”

One significant finding in this research is that eviction is associated with disruptive events in people’s lives. “We see an increase in debt in collection, an increase in people taking out payday loans, a drop in credit scores, a drop in the likelihood of having a credit card and a drop in the likelihood of having an auto loan,” van Dijk says. Importantly “signs of increasing financial strain appear two to three years prior to having a case filed against them – with credit scores falling, collections rising, and increased inquiries into payday loans.” The research further points out that accounting for the broader disruption is important for correctly estimating the effect of an eviction on financial distress.

While this paper provides some of the first economics research on evictions, the authors are clear that many questions remain for future work. “This analysis does not address how policies aimed at reducing the number of evictions, such as making court proceedings more tenant-friendly or providing short-term financial aid to struggling tenants, may affect the equilibrium in the rental market,” the authors write. “For example, landlords may be less willing to rent to low income tenants if the cost of eviction of a non-paying tenant is increased.”

“This paper provides some of the first estimates of the impacts of an eviction on tenants,” Humphries says. “From here, there’s still a lot of difficult and important work to be done thinking about how eviction policy fits into the broader equilibrium of the rental market.”