Research Spotlight: The Great Gatsby Curve: Probing the Mechanisms Behind Inequality and Its Persistence 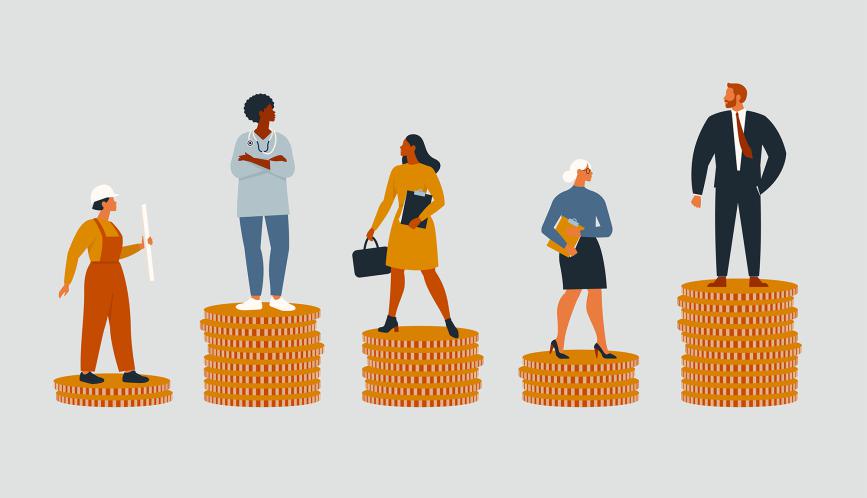 Economists have documented a strong and consistent relationship between income inequality and its persistence across generations. This pattern holds across national economies: where inequality is high, intergenerational economic mobility is low. The rich get richer; the poor are likely to stay poor.

This relationship—dubbed the Great Gatsby Curve (GGC) by former White House Council of Economic Advisers chair Alan Krueger—undermines the idea of the proverbial American dream. It calls into question economic policies premised in the ideal that all face equal opportunities and can, with hard work and persistence, get ahead.

Over the last 15 years, substantial research has probed mechanisms behind the curve. In a new working paper, HCEO codirector Steven Durlauf and MIP Network members Andros Kourtellos and Chih Ming Tan synthesize this research, outlining five classes of theories giving rise to this relationship between inequality and social mobility, then summarizing the evidence for these mechanisms.

First, the authors point out that relationships between inequality and persistence arise mathematically from models of income mobility. “Calculations of measures of cross-section inequality and degrees of intergenerational mobility are simply statistics generated by the stochastic process and the initial incomes in the populations,” they write.

The fact that the GCG arises mechanically and mathematically from measures of inequality and of mobility because they derive from a common stochastic process “does not render the evidence of a GGC uninteresting,” the authors write. “First, it is not the case that measures of inequality and mobility must necessarily exhibit positive dependence. Second, socioeconomic mechanisms are needed to understand why the stochastic process takes the form it does; i.e., why the relationship is positive.”

The first set of theories to explain the Gatsby curve center on the classic family investment model. In these models, parents divide their income between educational investments for their children and their own consumption. These investments, paired with a child’s latent abilities, produce human capital, which labor markets reward with income. Low-income parents have less resources to invest in their children.

On top of differing investments, some scholars suggest that the psychic stresses of poverty and deprivation hamper the ability to develop human capital and convert it into high-paying jobs in the workplace. Given differences in poverty rates, these stresses could explain observed Gatsby curves across countries.

Family investment models assume that parents cannot borrow against future offspring income to invest in their child. “Two classic analyses of the special role of credit constraints in the mobility process are Galor and Zeira (1993) and Han and Mulligan (2001), each providing clear paths that lead from inequality to persistence. Each produces a framework that can generate GGC-type equilibrium,” the authors write.

Another class of models that can generate a GGC is rooted in research on the technology of skill formation. This work, surveyed in Almlund, Duckworth, Heckman and Kautz (2011), theorizes that families and early life experiences lead children to develop cognitive and noncognitive skills that influence the development of further skills and outcomes in adulthood. In these models, timing of families’ investments matter; because parents are doing more than just purchasing education, inequalities in family structure such as single-parent households also matter.

In this vein, Becker, Kominers, Murphy, and Spenkuch (2015) fine-tune the human capital production function so that parents’ human capital increases the effectiveness of their investment in their child’s skill development. The investments from more educated parents outperform similar efforts from less-educated parents. This model also assumes that parents with higher education invest more in their children at each income level, which intensifies the impact of income differences on investment in offspring. This gives rise to persistent intergenerational inequality.

A third class of models, starting with Durlauf (1996a, b) argues that families segregate themselves into communities by income level in ways that diminish social interaction across classes, so socioeconomic status is fixed and transmitted across generations. The literature identifies two forces driving these social models. One is that neighborhoods influence local school spending. The importance of the spending disparities on educational outcomes has been questioned, but “our judgement is that recent research provides compelling evidence that expenditure differences matter,” the paper notes.

Neighborhoods also influence educational outcomes socially, through peer effects, norms, and networks, and through environmental factors, such as exposure to lead or violence and incarceration. The authors review many studies that demonstrate the importance of where children grow up in their life outcomes.

Social models produce different intergenerational income dynamics than the family models, because they depend on the range of incomes and conditions within a neighborhood and a constellation of personal and local economic factors constraining a family’s choice of location. Wodtke, Elwert, and Harding (2016) find that social influences of a neighborhood complement or reinforce family influences on social mobility. “[C]hildren from poor families are especially harmed when growing up in poor communities. Hence family and social mechanisms that matter for a GGC appear to be mutually reinforcing,” Durlauf et al. write.

These theories explain the preferences of the median voter, but the real policymaking power may lie with others. A small group of wealthy elites wields greater political influence and control over economic policy than the citizenry at large. This dynamic works against policies promoting income equality and mobility. The authors find a large literature that links wealth distribution to power over redistribution policy.

One model that focuses on power differentials to generate a Gatsby curve is from HCEO member Christopher Rauh (2017). As with other models, this one emphasizes how the political process determines public investment in education.  Education funding, determined by voting, drives social mobility. Education competes with other funding priorities, and the optimal funding choice depends on levels of inequality and voter turnout. Rauh finds “that the nature of voter turnout in the US— low turnout that skews to the educated—explains more than one-quarter of the variation in earnings inequality and intergenerational persistence when comparing the US to the other countries in his sample,” the authors note.

The paper also explores theories that focus on meritocracy, fairness, and attitudes people hold about the drivers of upward mobility. In the U.S., a majority believe that effort, not luck and circumstances, is what generates economic success. Europeans are more likely to credit luck and connections than hard work. Americans also overestimate the degree of economic mobility in the U.S. and are thus less likely to favor redistributive policies.

A fifth theoretical basis for the rise of a GGC centers on the role of aspirations. Skills provide the capacity for action, but aspirations spark idealistic goals to focus and drive those actions. “[A]spirations have both belief and preference dimensions that, in our view, constitute a distinct, psychology-based approach to the inequality/mobility nexus. Aspirations are affected by family and social influences in ways generating greater dispersion in aspirations as inequality increases, which can lead to a GGC in the same way that the family and social models we have outlined above produce the relationship. We see the explicit linking of aspirations to the GGC to be a potentially important new direction for research,” the authors write.

The paper concludes with a review of empirical evidence of Gatsby curves around the world, and GCCs that link income persistence to inequalities in factors that determine income, such as cognitive and noncognitive skills or education levels, rather than income itself. They review mechanisms such as education and family structure that give rise to the curve.

The authors conclude that “much more work is needed to understand how different measures of inequality and mobility produce a GGC.” They call for integrating perspectives from sociology and psychology, such as the role of aspirations and cultural capital as sources of the GGC, into economic models. Finally, the authors see a need for a “much more systematic investigation of how transitional dynamics and economic growth interact with inequality/persistence comparisons. Comparisons of internal GGC for the US and China, for example, are not especially meaningful in the light of the fact that one economy is experiencing radical qualitative transformation and the other is not.”