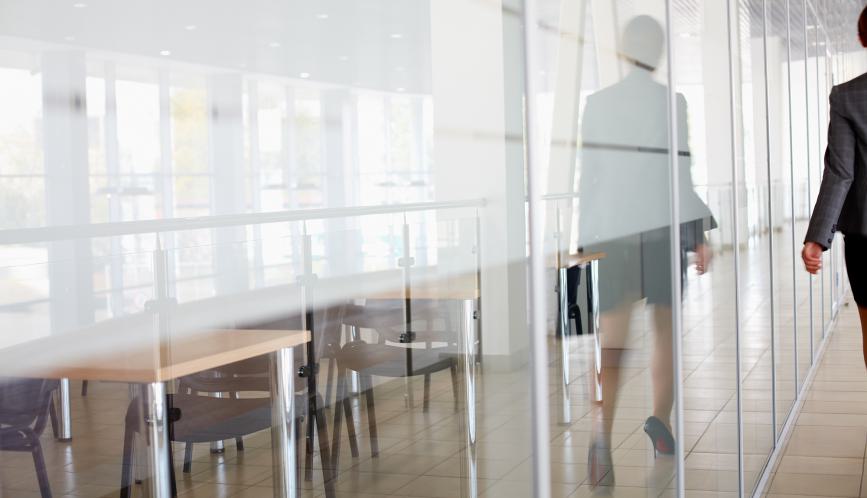 Reflection of woman wearing business attire on the window of a conference room.

Economics is a field that has long been dominated by men. To date, only one woman has won the Nobel Prize in Economic Sciences (Elinor Ostrom in 2009.) For a period, it seemed that economics was becoming more equitable in terms of gender. In the 1970s and 80s, women were entering the profession in increasing numbers. Survey data from the American Economic Association’s Committee on the Status of Women in the Economics Profession (CSWEP), which tracked progress across 43 U.S. economics departments, shows that in 1973 women accounted for 2 percent of full professors, 4 percent of associate professors, and 9 percent of assistant professors. By 1993, the number of female positions had grown exponentially: 6 percent were full professors, 11 percent were associate professors, and 21 percent were assistant professors. Since the 1990s however, this progress has slowed and, in some areas, women’s representation has actually dropped.

In their recent HCEO working paper, IP network member Shelly Lundberg and her co-author Jenna Stearns document the trends in gender representation in economics over the past 25 years and examine the potential mechanisms behind women’s stalled progress.

“From the early 1990s to today, we’ve seen continued progress in the share of women in more senior positions in academic departments, among full professors and associate professors,” Stearns says. “That’s usually driven by the fact that in earlier decades, the share of women going into economics and becoming assistant professors was increasing. But it's worrying in thinking about what’s going to happen going forward, because if we’re not seeing continued progress among female graduate students, female assistant professors, female undergrads - there’s not going to be a pipeline from which to draw on in the future.”

Using data gathered by CSWEP and AEA from 1993 to 2017, the authors tracked gender representation among faculty and graduate students. In a subset of economics departments known as the Chairman’s Group, the number of female faculty grew slowly over the time period. Female full professors grew from 6 to 13 percent and associate professors from 11 to 23 percent. The percentage of female assistant professors was not so straightforward. The number grew from 20 percent in 1993 to 29 percent in 2009, but then decreased to 24 percent by 2017. Female representation among Ph.D. students and undergraduates has remained similarly stagnant. First-year Ph.D. students were 28 percent female in 1993 and 30 percent female in recent years, while the “female share of senior economics majors has remained between 30 and 35 percent since the data series began in 1998.”

The authors also compared women’s progress in economics to other academic disciplines, and found that from 2002 through 2012, there is a general upward trend in the share of female faculty across ranks. They note that the hard sciences had the lowest share of female professors at all ranks, while the social sciences had the highest. “Economics remains solidly within the lowest group in terms of female faculty shares, alongside physics, math, and engineering,” the authors write. “At the senior level, economics seems to have lost some ground relative to other sciences during this period.”

To gain a better understanding of the career progression of female academic economists over time, the authors next examine fields of study, which may influence trends in publishing and tenure. Research in this area is limited, so the authors look at data on the gender and research topics of economics Ph.D. recipients from 1991 to 2017. Over this period about 29 percent of new Ph.D. recipients were female. The authors find that the distribution of recipients across fields “has not evolved differentially for men and women since the early 1990s.” This is important as it shows that recent female graduates do not differ from men in their research interests and that “differential trends in field choice over time cannot explain the observed changes in the gender gap in the share of Ph.D. recipients who become assistant professors and who are later tenured.”

Much of the discussion on gender representation in economics has centered around what is known as the “leaky pipeline,” or the phenomenon that women are less likely to progress along the economics career path. CSWEP data suggests that the economics career pipeline is the “leakiest” at the stage when most academics receive tenure. The authors cite a 2004 Ginther and Kahn study which showed that 10 years after receiving their Ph.D., “female economists were 21 percentage points less likely than men to have a tenured academic job.” Productivity differences, such as publications count and citations, could only explain 30 percent of this promotion gap.

Since the authors find that differences in productivity cannot fully explain the gender difference in career progression, they explore barriers women may face throughout their professional lives. The authors note that in a male-dominated field, women have more limited access to mentorship and other networking activities, which can have repercussions in their research and co-authorship. A 2017 study by Sarsons showed that co-authored economics papers appear to be evaluated differently based on author gender, with women receiving “significantly less credit for co-authored work, particularly when they co-author with men.” Other studies on potential gender discrimination in publishing have found mixed results, although many point to women receiving differential treatment.

The evaluation process for tenure and promotion decisions is also increasingly coming under scrutiny. In other research, Stearns has found that university policies designed to help promote gender equity can sometimes have the opposite effect. For example, she notes that gender-neutral tenure clock-stopping policies have actually been shown to increase tenure rates for men and decrease tenure rates for women, as men and women may use the extra time differently and are in turn evaluated differently.

The authors conclude that there are many interrelated barriers facing women in economics which revolve around two distinct mechanisms: differences in productivity between men and women, and differences in how they are evaluated. In order to see further progress, they note, it is important that the profession as a whole is aware of the issues and acknowledge that change is needed.

A 2008 survey of AEA members highlights the difficulty in moving forward. The survey showed a significant gender gap in beliefs about equal opportunity, with 76 percent of female AEA members believing that opportunities for economics faculty in the U.S. favor men, while fewer than 20 percent of men shared that view. The authors note that “one-third of male economists felt that opportunities in economics actually favor women.”

Stearns says she believes the profession is moving in the right direction. As an example, she notes that the AEA is currently conducting a survey on harassment in economics, which will provide the first quantitative evidence on some of the more explicit barriers for women in the field.

“How do we start to address that these barriers exist and how do we remove opportunities for implicit bias that are driven by beliefs about effort or ability that are influenced by these barriers?” Stearns asks. “I think that really is the first step in going forward, and then we can address more specific actionable policies. But doing so is less effective if we’re not willing to realize that part of this is changing beliefs.”

As the authors note, making economics a more equitable field is not only fair, it also helps create “an environment where equal work yields equal rewards.” And those aren’t the only benefits. “Diversifying the economics profession is important,” the authors write, “because a greater breadth of individual perspectives will affect what is taught in the classroom, what research questions are asked, and how policy discussions are addressed.”