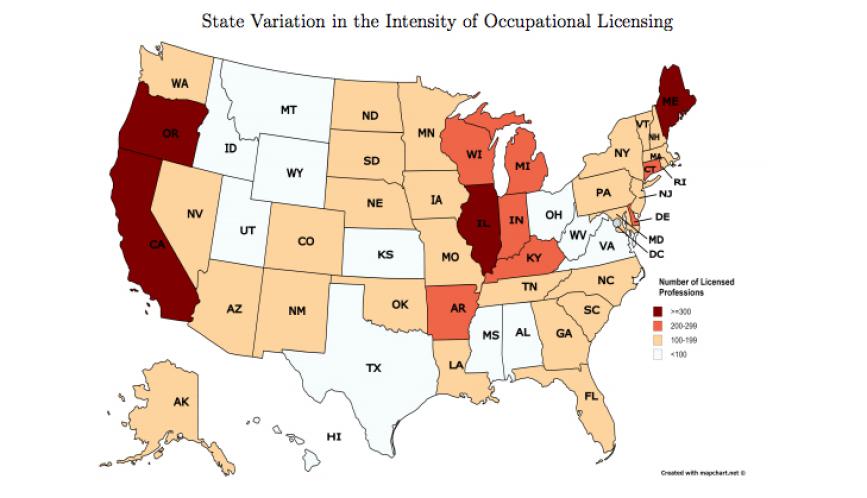 Map titled "State Variation in the Intensity of Occupational Licensing"

A new HCEO working paper by MIP network member Peter Blair and his co-author Bobby Chung was featured in the Wall Street Journal. The paper looks at the effects that occupational licensing has on racial and gender wage gaps.

Blair, an assistant professor of economics at Clemson University, found that job licensing reduced these wage gaps as they "enable firms to rely less on race and gender as predictors of worker productivity." The paper notes that the racial wage gap between white and black men fell by 43 percent, while the gender wage gap between women and white men was reduced between 36 to 40 percent.

Despite these benefits, occupational licensing has come under attack by some politicians who argue that the process obstructs certain career paths. “The traditional view has been that the license is just a barrier to entry,” Blair told the WSJ. An unintended effect of the licenses is also studied in the paper: that the process signals to employers what workers have criminal records, as many licenses bar ex-convicts.

While bipartison efforts seek to curb occuptional licensing, such reforms "could have the unintended consequence of worsening discrimination in hiring," the Wall Street Journal notes.

“This is helping us to understand the institution of licensing,” Blair told the newspaper. “In order to reform something, we need to understand it.”

You can read "Occupational Licensing Reduces Racial and Gender Wage Gaps: Evidence from the Survey of Income and Program Participation" here, and the Wall Street Journal article here.