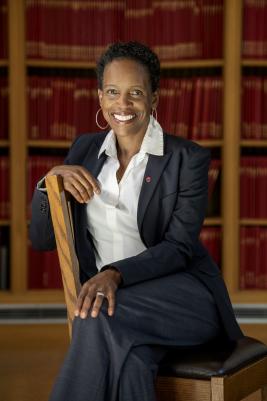 As Ohio State’s executive vice president and provost, Dr. Melissa L. Gilliam is the chief academic officer of one of the largest and most comprehensive universities in the country. She leads an academic enterprise that includes 15 colleges, more than 7,500 faculty members and more than 67,000 students on campuses in Columbus, Lima, Mansfield, Marion, Newark and Wooster.

A scholar, physician, educator, and academic leader, Dr. Gilliam joined Ohio State from the University of Chicago, where she was vice provost, the Ellen H. Block Distinguished Service Professor of Health Justice, and professor of obstetrics and gynecology and pediatrics. At the University of Chicago, Dr. Gilliam has focused on academic excellence, supporting faculty at all stages of their careers, and issues involving diversity and inclusion.

Dr. Gilliam conducts domestic and international research, addressing adolescent health and education using technology, design, and narrative. Her research is funded by the National Institutes of Health, The Bill and Melinda Gates Foundation, The Ford Foundation, and others.  Dr. Gilliam is a member of the National Academy of Medicine.

During her tenure at the University of Chicago, she held a variety of roles, including founder and director of the university’s Center for Interdisciplinary Inquiry and Innovation in Sexual and Reproductive Health, Dean of Diversity and Inclusion for the Biological Sciences Division at University of Chicago Medicine, and leader of the Program in Gynecology for Children, Adolescents and Young Adults.