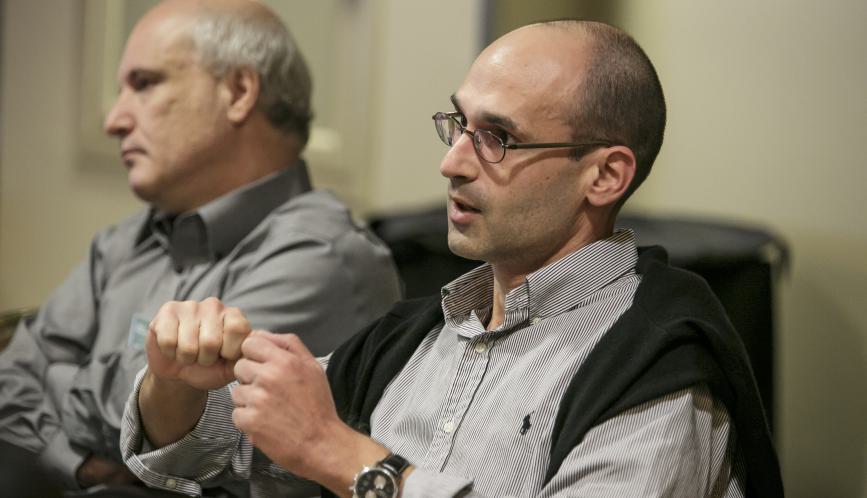 Andros Kourtellos, an MIP network member, is Associate Professor of Economics at the University of Cyprus. He is also a senior fellow of the Rimini Centre for Economic Analysis of the University of Bologna and member of the Academic Council of the Economic Research Centre (ERC) of the University of Cyprus. He was recently awarded a Marie Skłodowska-Curie Individual Fellowship by the European Commission to carry out research on the econometrics of intergenerational mobility. His primary research interests are econometrics, inequality, social mobility, economic growth, and macroeconomics. His work has documented the existence of status traps in intergenerational mobility, which can reduce the impact of favorable shocks or interventions for disadvantaged children and so hinder upward mobility. Recently, he also developed estimation and inference for a structural threshold regression model, which is particularly useful for the estimation of multiple equilibria and poverty traps.

I have done work in many areas related to inequality. In the past I have done work on cross-country income inequality. For the last few years, I have been working on intergenerational mobility. In particular, I have been working on developing new ways to measure mobility that move beyond from linear characterizations to models that allow for the existence of poverty traps and other deep nonlinearities. In particular, I have developed estimation and inference for a structural threshold regression model that allows for an endogenous that allows for an endogenous threshold variable as well as for endogenous regressors. This model is particularly useful for the identification of poverty traps. For example, under certain conditions, theoretical models of credit constraints of Galor and Zeira and the like or models of neighborhood influences of Benabou or Durlauf, may generate a linear transmission of socioeconomic status within a group of individuals, while different levels of credit constraints or neighborhood quality  give rise to different intercepts and slopes.  The structural threshold regression accounts for the endogeneity bias by including regime specific control functions in the threshold regression in the spirit of Heckman’s sample selection method.   Another area of my research has looked into model uncertainty due to theory uncertainty. The reason is that intergenerational mobility is not a monocausal causal theory. For example, a recent paper by Chetty and co-authors studied the variation in intergenerational mobility across commuter zones in the US by considering more than 30 variables associated with 9 different theories such as segregation, family investments, social capital, etc.  One major problem in identifying the channels of intergenerational mobility is that there do not exist good theoretical reasons to include a particular set of theories or proxies a priori. This is due to the fact that the theories of mobility are openended or mutually compatible. While the problem of model uncertainty is not new, it has been largely ignored in the literature of inequality and mobility. Let me note that this idea was introduced by Brock and Durlauf in the context of economic growth who argued that this problem yields non-robust, that is, ‘fragile’ parameter estimates. In my work, I adapt model averaging methods to account for  model uncertainty and explore its implications on the characterization of the mobility process. In general, these methods shift the focus of analysis from estimates obtained from a specific model to estimates that do not depend on a particular model specification but that are instead conditional on a model space. More recently, I have also started working on the identification of the role of genetic influences on intergenerational mobility by developing novel methods to uncover genetic and environmental channels from kinship data. In particular, this new line of work aims at providing a unified structural framework for socioeconomic and biological mechanisms.

I think we need to develop new ways to measure the role of different factors that affect the different dimensions of inequality. How much of the inequality is due to genes, education, neighborhoods and social influences, etc.? There are several challenges with such a decomposition. A major challenge is related to aggregation. There is recently some evidence that suggests that inequality exhibits recurring patterns at progressively smaller levels of aggregation: country-level, regional level, neighborhood level, household level, and individual level. I do not think that we have a good understanding of the decomposition of inequality at different levels of aggregation and the impact of aggregation on the role of factors. Another area that needs new research is identification in intergenerational mobility using genetic information in order to bridge the gap of theory and empirics, especially in view of the explosion of genetic data availability.  As we have seen in this conference, while some papers focus on statistical relationships to make reduced form claims, others rely exclusively on a certain economic theory by ignoring properties of the data and sometimes even ignoring the implications of other theories. A major challenge to identification is the fact that economic theory typically implies nonlinear models. Besides some notable exceptions such as the work of James Heckman and co-authors most of the existing econometric work on mobility relies on linear models. I think more work is needed to uncover the mechanisms by which genes affect socioeconomic outcomes by developing nonlinear structural econometric models.

I think young researchers have the tendency to get lost in the details. A researcher is like a hiker who is trying to make his way through the jungle. He has to go through a very deep forest by clearing his pathway at every step of his way. So, it is vital to either have a GPS or find a way to get a bird’s eye view. For example, from time to time, he has to climb up a tree or hike along a ridge to have a broader view. Similarly, in research one should not get lost in the technical details but always keep in mind the big picture. Don’t lose the forest for the trees! This is important.