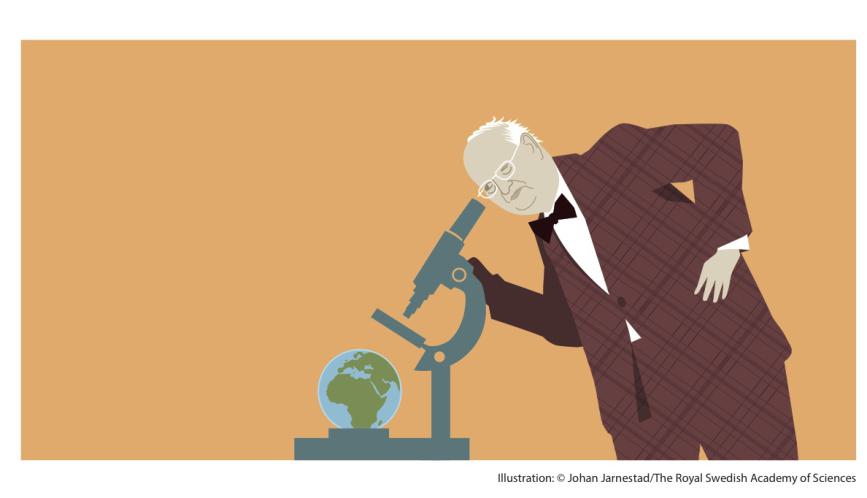 Illustration of Angus Deaton looking at Earth through telescope

Health Inequality Network member Angus Deaton was awarded the 2015 Nobel Prize in economics. The committee commended Deaton for increasing understanding of individual consumption choices, and how those choices affect poverty and welfare.  The committee writes that "[b]y linking detailed individual choices and aggregate outcomes, his research has helped transform the fields of microeconomics, macroeconomics, and development economics."

Deaton is Dwight D. Eisenhower Professor of Economics and International Affairs at the Woodrow Wilson School of Public and International Affairs and the Economics Department at Princeton University. His interests include health, development, poverty, and inequality; he is the author of four books and many papers. He is a corresponding Fellow of the British Academy, a Fellow of the American Academy of Arts and Sciences, and of the Econometric Society and, in 1978, was the first recipient of the Society's Frisch Medal. In 2012 he was awarded the BBVA Foundation Frontiers of Knowledge Award. In April 2014 he was elected a member of the American Philosophical Society, and in 2015, was elected a member of the National Academy of Sciences.

His current research focuses on the determinants of health in rich and poor countries, as well as on the measurement of poverty in India and around the world. He also maintains a long-standing interest in the analysis of household surveys. Read more at the Nobel Prize website.