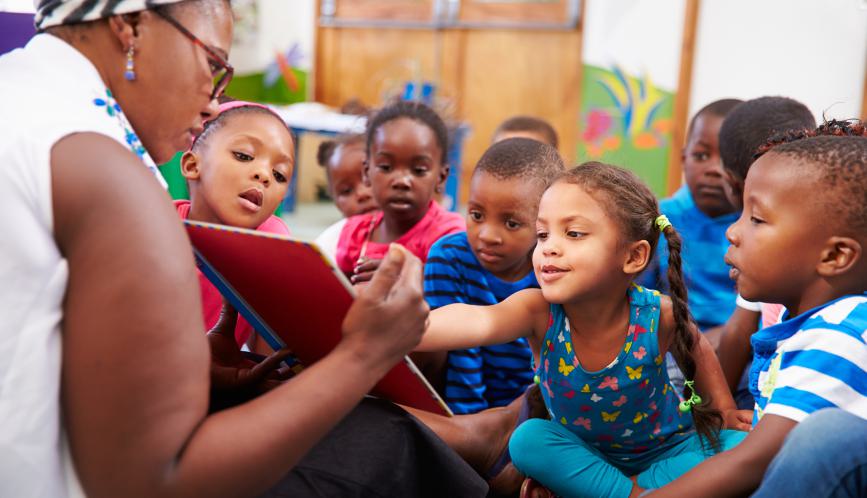 Young children crowding around a teacher holding open a book.

The authors compare gender differences in the treatment effects from two early childhood programs, The Carolina Abecedarian Project (ABC) and the Carolina Approach to Responsive Education (CARE), to control groups who either stayed home or attended a low-quality program. Launched in North Carolina in the 1970s, ABC/CARE participants began the program at 8 weeks of age and continued until age 5, with long-term follow-ups through age 35. It was an intensive, high-quality program targeting disadvantaged children and their families that combined health, nutrition, family engagement, childcare, and early learning.

The program produced positive impacts across the life cycle for both genders, yet with significant differences. The paper notes that "high-quality childcare greatly benefits boys relative to low-quality childcare." Boys also have better outcomes if they stay home, which is not true for girls. Females in the treatment group had more outcomes across multiple domains, yet males had greater monetary benefits, in part due to a reduction in criminal activity, as shown in "The Life-cycle Benefits of an Influential Early Childhood Program" by Heckman et al.

Girls who attended ABC/CARE had higher high school and college graduation rates, with the average years of schooling increasing 1.8-2.1 years. Employment at age 30 increased between 8 to 13 percent. Boys had more positive health outcomes, including lower hypertension and less drug use. Their income increased between $19,000 and $24,000. Employment at age 30 increased 11 to 19 percent. The paper shows that low-quality care does not produce the same outcomes.
High school, college and years of schooling rates were lower for girls who received low-quality childcare. Employment rates at age 30 are lower for girls who remained at home. And low-quality care was found to actually be detrimental for boys. Similarly, boys are more likely than girls "to be harmed by unfavorable home environments." These findings are consistent with previous research showing that boys are more vulnerable early in life.
This work shows that quality in childcare matters. "Our analysis sounds a cautionary note about the value of early childcare programs," the authors write. While early childcare has been lauded for its benefits, "little attention has been paid to the quality of those programs." High-quality early childhood programs can produce a 13 percent return on public investment, yet program quality varies greatly.
"Failing to invest in quality is a missed opportunity, especially since quality programs pay for themselves," Professor Heckman says.
You can read "Gender Differences in the Benefits of an Influential Early Childhood Program" here.