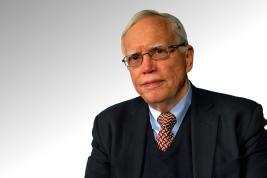 James J. Heckman has devoted his professional life to understanding the origins of major social and economic problems related to inequality, social mobility, discrimination, skill formation and regulation, and to devising and evaluating alternative strategies for addressing those problems. His research recognizes the diversity among people in skills, family origins, peers, and preferences as well as the diversity of institutions and regulations and the consequences of this diversity for analyzing and addressing social and economic problems. This activity entails conducting extensive empirical studies on a range of questions guided by economic and social theory. It also entails developing new economic and statistical tools to frame questions, to analyze them, and to guide the formulation and implementation of sound economic and social policies.

Heckman’s work is rooted in economics. He collaborates across disciplines to get to the heart of major problems. His recent interdisciplinary research on human development and skill formation over the life cycle draws on economics, psychology, genetics, epidemiology, and neuroscience to examine the origins of inequality, the determinants of social mobility, and the links among stages of the life cycle, starting in the womb.

In 2000, Heckman shared the Nobel Prize in Economics for his work on the microeconometrics of diversity and heterogeneity and for establishing a sound causal basis for public policy evaluation. He has received numerous other awards for his work, including the John Bates Clark Medal of the American Economic Association in 1983, the Jacob Mincer Award for Lifetime Achievement in 2005 from the Society of Labor Economics, the 2005 and 2007 Dennis Aigner Award for Applied Econometrics from the Journal of Econometrics, the Ulysses Medal from the University College Dublin in 2006, the 2007 Theodore W. Schultz Award from the American Agricultural Economics Association, the Gold Medal of the President of the Italian Republic, awarded by the International Scientific Committee of the Pio Manzú Centre in 2008, the Distinguished Contributions to Public Policy for Children Award from the Society for Research in Child Development in 2009, and the Frisch Medal from the Econometric Society in 2014 for the most outstanding paper in applied economics published in Econometrica in the previous five years. He is a recent recipient of a NIH MERIT award.

He is currently co-editor of the Journal of Political Economy. He has published over 300 articles and 9 books. His most recent book is The Myth of Achievement Tests: The GED and the Role of Character in American Life (University of Chicago Press, 2014). He is actively engaged in conducting and guiding empirical and theoretical research on skill development, inequality, and social mobility.

Heckman has a BA (1965) in Mathematics from Colorado College and an MA (1968) and PhD (1971) in Economics from Princeton University, where he also earned a certificate in Demography under Ansley Coale.