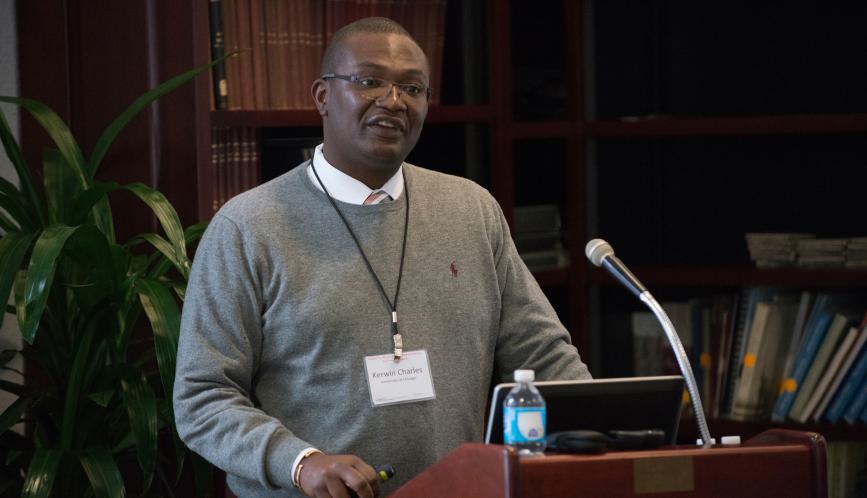 Kerwin Charles, a member of our Inequałity: Measurement, Interpretation, and Policy network, has been named interim dean of the University of Chicago Harris School of Public Policy. His appointment went into effect on July 1.

Charles is the Edwin and Betty L. Bergman Distinguished Service Professor in the Harris School. He joined the faculty in 2006, from the University of Michigan. His research focuses on a broad range of topics in the area of applied microeconomics, including the effect of racial composition of neighborhoods on the social connections people make; the propagation of wealth across generations within a family; the effect of retirement on subjective well being; and how prejudice can account for wages and employment differences by race and gender. He is also a research associate at the National Bureau of Economic Research.

In a recent interview on the Chicago Harris podcast, Charles talks about his "lifelong interest in inequality" and economics. "The inquiry is not merely academic. It matters for the lives of these people, the family that they leave behind," he says. "And those of us that think, even fleetingly, that our lives are untouched by what's happening to them, if it is the case that poverty becomes a state of life from which people feel themselves unable to escape, and if the poor, when they look around, notice that everyone else is poor, is just like them, then their commitment to and their engagement with the broader social fabric, by which we all live, must become frayed. If it becomes frayed, then it means there's no such thing as an us and them."

Charles succeeds Daniel Diermeir, who moved to the role of Provost of the University on July 1. "Kerwin has long been an outstanding leader and passionate supporter of Harris," Diermeier said in a statement to the school.

In the Chicago Harris podcast, Charles lauded the interdisciplinary tradition of the Harris School and spoke about his plans for his new position.

"I want Harris to thrive," he says. "I want its upward trajectory to be unchanged."