The Murky Political Economy of Inequality

Inequality, Immobility and Living Standards Are Not the Same Things 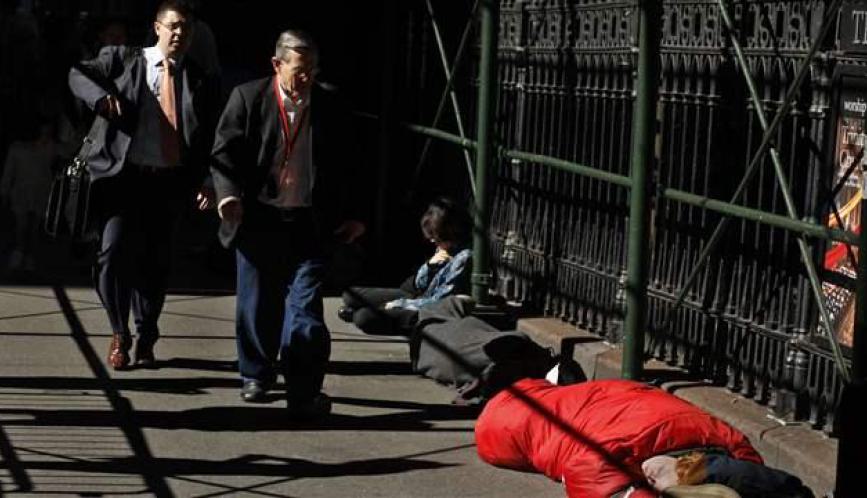 Men walking past houseless person sleeping on the street

Most economists believe that income inequality is bad for the economy, according to a recent AP survey. Most worry that consumption will be flatter when the income gradient is steep, which will undermine growth. But this appears to be more of a hunch than a fact. There is in fact no compelling evidence that inequality and growth are causally related: as a new paper by the economist Jared Bernstein confirms. There is no solid evidence that income inequality and growth are related, in either direction.

Inequality is back in the news, thanks to President Obama’s big speech on inequality. It may not be dinner-table talk in most American households. But it has provoked an animated debate among bloggers, wonks, and politicos. Unfortunately that debate has often be confused, in part because of an unhelpful conflation of different economic factors: income inequality; intergenerational mobility; and middle-class living standards.

Inequality: Big in the Wonkosphere

Paul Krugman agrees with the President that inequality is the “defining challenge of our times,” and hails the speech as a pivotal political moment, which could signal a new egalitarianism.Neera Tanden insists that addressing income inequality is good politics for the Democrats; Jon Cowan and Jim Kessler think it would be “disastrous.” Ezra Klein questioned whether inequality really is the “defining challenge,” asking provocatively: “Imagine you were given a choice between reducing income inequality by 50 percent and reducing unemployment by 50 percent. Which would you choose?” Klein quotes liberal economist Jared Bernstein, who has just released a paper on inequality and growth: “there is not enough concrete proof to lead objective observers to unequivocally conclude that inequality has held back growth."Heather Boushey argues that pre-k will be good for growth and good for inequality. Meanwhile, Scott Winship doubts even the data, suggesting that “the empirical case that rising inequality is the challenge of our time is less than compelling.”

Talking Past Each Other

Who’s right? They’re all arguing about inequality, but is the President? Here is what Obama actually said: "There’s a dangerous and growing inequality and lack of upward mobility that has jeopardized middle-class America’s basic bargain that if you work hard, you have a chance to get ahead. I believe this is the defining challenge of our time: making sure our economy works for every working American…” O.K., Mr. President, can I stop you right there? What is the defining challenge again? Is it “dangerous and growing inequality?” Or “lack of upward mobility?” Or “making sure our economy works for every working American?” Because those are three distinct “defining” challenges—which may or may not be causally connected, and certainly do not demand the same policy responses.

• Challenge #1: Inequality
To narrow the gap between rich and poor, tax the rich more and give it to the poor via cash benefits or tax credits.
• Challenge #2: Immobility
To improve upward mobility, invest in pre-K, parenting programs, better teachers in poor neighborhoods, apprenticeships and better college access.
• Challenge #3: Economy Working for All
To create an economy that securely supports more families, boost aggregate demand to create jobs, raise the minimum wage, introduce health care fit for at least the 20th century, improve family leave and invest in infrastructure and skills.

Of course, you may be worried about all three challenges, and so want to pursue policies under each heading. Fine. But don’t confuse them. And don’t make bad empirical arguments trying to link them all together. Make good political arguments for each.

The problem is that, often for political reasons, people strive to show how these three challenges are really just one challenge, by making causal connections. If we reduce the gap between rich and poor, social mobility will improve; if we raise the minimum wage, the income gap will narrow; and so on. The trouble is, the causal links are weak, which leads to weak arguments.

1. The left-wing search for evidence that a big rich-poor gap impacts GDP in a negative direction has proved as elusive as the right-wing search for a positive connection. It is striking that Krugman does not, in the end rest his argument on these direct casual grounds. He makes the more interesting argument that inequality has made for bad macroeconomic policy, since the rich elite have pushed the political classes towards austerity-oriented policies that have killed job growth.

2. The jury is still out on whether income inequality and rates of intergenerational mobility are related. The "Great Gatsby Curve" shows an association between the two internationally. But no causal connection has been established, and there is enough variation to doubt its existence: as Miles Corak shows, Canada and Australia do pretty well on the mobility stakes, despite high inequality. Another analysis finds that country size has just as big an effect on mobility. And the recent work by Chetty and colleagues at Harvard finds little evidence for an inequality-immobility link in different parts of the US.

3. Measures required to tackle Challenge 3 – wages, family leave, health care and so on - are squarely aimed at improving the quality of life and economic security of ordinary Americans. But on the face of it, there is no reason to think such measures will seriously impact on upward mobility: they are more about making middle class life better than improving the movement of people into that class. Nor are they likely to influence income inequality, which has been largely driven by the rapid income growth at the very top of the income distribution.

This debate will go better which of the three challenges we are really motivated by: or put differently, if we could make progress on just one, which would we choose? And it will probably help if we are explicit about the moral claims underlying our preference. For me, the "defining challenge" of our times is not income inequality or the squeeze on middle-income Americans (important though both are). It is the shocking, illiberal, immoral transmission of poverty and affluence from one generation to the next.

A version of this article appears in the Brookings Institute Social Mobility - Memos - on December 18, 2013, with the headline: Inequality, Immobility, and Living Standards Are Not the Same Thing