Clans, Guilds, and Markets: Apprenticeship Institutions and Growth in the Pre-Industrial Economy
Families in Macroeconomics
Bargaining over Babies: Theory, Evidence, and Policy Implications
Life in Shackles? The Quantitative Implications of Reforming the Educational Loan System
A Life-Cycle Model of Trans-Atlantic Employment Experience 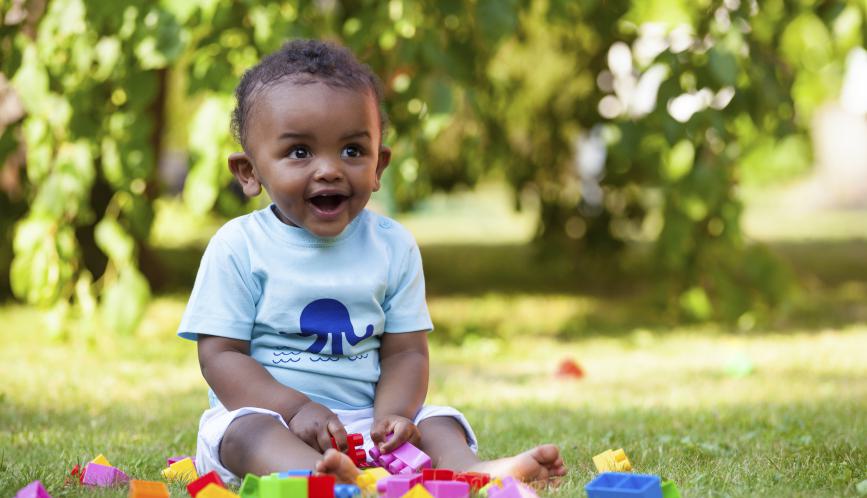 Baby sitting in grass with Legos.
Bargaining over Babies: Theory, Evidence, and Policy Implications, April 2016
Fertility rates have fallen in developed countries around the world, causing governments and economists alike to consider how this may impact economic growth. Countries with social policies and economies as diverse as Denmark, Norway and Greece have all seen a decline in the total fertility rate (the average number of children a woman can expect to have based on present data), according to data from the United Nations Population Division. In Japan, Germany, Austria, and some Eastern European countries, the TFR has been under 1.5 for more than two decades, well below the 2.1 rate that many experts consider to be the number of babies needed to replace current population levels.
Matthias Doepke and Fabian Kindermann, members of HCEO’s Markets network, have examined how couples make fertility decisions in their working paper, “Bargaining over Babies: Theory, Evidence, and Policy Implications.” Drawing on newly-available data from the Generations and Gender Programme (GGP), which includes information from 19 countries, the authors looked at how couples agreed or disagreed on childbearing. Their paper is the first in fertility literature to take this bargaining model perspective.
“When you think about fertility, it seems obvious that there should be some bargaining because you need two parents to make a child,” Doepke says. A professor of economics at Northwestern University, Doepke has long been interested in population dynamics and economic growth.
The GGP data set, which covers: Australia, Austria, Belgium, Bulgaria, the Czech Republic, Estonia, France, Georgia, Germany, Hungary, Italy, Japan, Lithuania, Netherlands, Norway, Poland, Romania, the Russian Federation, and Sweden, is particularly useful in studying these concepts. “They have a question which specifically asks both of the partners whether/if they want to have a baby right now,” Kindermann says. “Previous surveys had asked how many children do you want to have, which informs us a little bit, but not as strongly as this essential question of ‘Do you want to have a kid now and does your partner?’”
Kindermann, an assistant professor at the Universität Bonn, points out that disagreement between couples over childbearing can be substantial. Couples that already have one or two children, as many as 70 percent may disagree. The differences are also pronounced in countries that already have low fertility rates, such as Germany and Bulgaria. Findings show that in these low fertility countries, the female is less likely to want a/another child.
“Countries that have women being more likely to be opposed are the countries where women do most of the work and men do very little,” Doepke explains. This disagreement, he says, “hints a little bit at inequality in the burden of childcare.”
“We find that it is really essential for partners to agree in order to really have a baby,” Kindermann says.
Which partner disagrees is an important factor, as it impacts where policy interventions should be directed. In their research, the authors found that targeting mothers with social programs is much more useful than targeting fathers or the couple as a whole. Kindermann says that helping out mothers is “two to three times as efficient in monetary terms.”
For example, writing a check to expectant parents doesn’t have any direction, Doepke explains. “It’s not more helpful to the mom than to the father.”
There are two reasons for the difference in impact. Women are more likely to oppose having a/another child and, according to the author’s estimation, are more receptive to incentives.
France is often held as the gold standard for maintaining a strong fertility rate, as theirs has hovered around 2 percent for the last 10 years. The country’s generous social policies may hold the key to its success. Mothers and fathers alike can take three years paid parental leave, according to the European Union website. The French government subsidizes childcare, with free, full-time school provided for children over the age of three. Mothers receive a cash incentive for staying home for up to one year following the birth of her third child, a useful incentive that this paper also considers.
Policies aimed at mothers aren’t the only ones that prove to be more efficient, Kindermann notes. Policies that subsidize higher-order children only are also more cost-effective than those that would subsidize all children. Many couples would already have at least one child, according to the authors, so the subsidy for those children would not affect the fertility rate.
Governments must also be mindful that their policies don’t unwittingly reinforce social norms, Doepke says.“You also want to think about other directions, such as parental leave policies, which aren’t always obvious,” Doepke says. “If you have a generous leave for mothers rather than for fathers, such a policy would support and promote a traditional division of labor.”
He offers Germany as an example, which offers mothers a three-year parental leave. The policy seems nice at face value, with many mothers taking the whole three years. This ultimately results in mothers having a long gap in their careers and being expected to do much of the work of childcare. Citing this, Doepke says that a policy may seem favorable but can “backfire because of what it implies the division of labor will be.”
In the GGP data, high fertility countries such as Belgium, France, and Norway already have well-balanced fertility intentions between women and men.
Countries grappling with these historically low fertility rates are facing serious problems. A shrinking population not only affects economic growth, but also makes it difficult to maintain social programs.
The bargaining model put forth here is necessary to account for the fertility disagreements between couples. “The link from disagreement to total fertility suggests that men are not able to fully compensate their partners for their child care duties,” the authors write, making policy interventions crucial.
“We want women to agree on having these children,” Kindermann says. Therefore, the key takeaway for countries with an unequal division of labor and low fertility rate is to make policy that “actually alleviates the burden from women.”

Thank you to the authors, Professor Matthias Doepke and Professor Fabian Kindermann, for their assistance in completing this article.