Building Inter-Ethnic Cohesion in Schools: An Intervention on Perspective-Taking 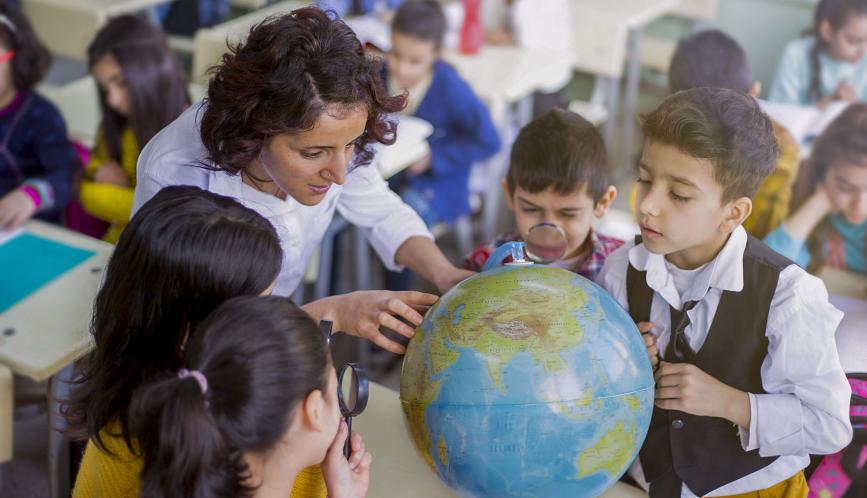 School children and teacher looking at a globe in a classroom.

Since the start of the Syrian civil war in 2011, Turkey has received more than 3.5 million registered refugees, more than one million of whom are children. Providing education to refugee children and helping them integrate into their host country is always a challenge. The United Nations High Commissioner for Refugees reports that worldwide, refugees are five times more likely to be out of school than the global average. The importance of attending school during times of displacement cannot be overstated: it helps foster social cohesion, address psychosocial needs, and “offers a stable and safe environment for those who need it most.”

Since 2016, the Turkish Ministry of Education has adopted an active policy of placing refugee children in state schools, though maintaining inter-ethnic cohesion in these schools has been a challenge. In response to this, the Turkish government convened a multidisciplinary group of educators, consultants and developers to design a curriculum called “Understanding Each Other,” intended to increase perspective-taking among students. The curriculum “encourages students to understand and experience the emotions of the described subject” through reading and visual materials and games. Working in collaboration with the Turkish government, IP network member Sule Alan and her co-authors evaluate this program, measuring outcomes “that are fundamental to economic interactions and social cohesion, including peer violence, social exclusion, and prosocial behavior.”

“Understanding Each Other” focuses on fostering perspective-taking, “a cognitive process of viewing a situation from the perspective of another person.” The authors note that perspective-taking “is associated with lower social aggression, higher trust, and social cooperation” and is also related to being able to analyze social situations before acting.

In order to evaluate the effectiveness of the curriculum, Alan and her team implemented the program as a cluster randomized controlled trial.

“The current sociopolitical context in Turkey provide an ideal setting to explore ways to build ethnic cohesion in schools. The massive refugee influx has led to a rapid change in the ethnic composition of schools, providing us with a natural experiment to test this cohesion intervention,” Alan says. “That was the idea: to think about a curricular program, a road map for teachers that would help build inter-ethnic cohesion in schools, and facilitate integration of refugee children in such turbulent times.”

The sample included approximately 7,000 elementary school children, 18 percent of whom were refugees, from 80 schools. The researchers collected baseline data from all children in the spring and fall of 2018. The program was implemented during the entire 2018-19 academic year, by the students’ regular teachers who were trained in the program by designated education consultants. An average of three lecture hours per week were devoted to the curriculum. Crucially, the program was designed with no explicit references to ethnicity. Alan and her team sampled three classrooms per school, collecting endline data in May 2019.

To evaluate the program, the authors put together a multidisciplinary toolkit that measures the cohesiveness of the school and classroom environment. The toolkit included administrative diary logs of high-intensity peer violence on the school ground, friendship ties (networks), incentivized lab-in-the-field experiments to measure prosocial behaviors, achievement tests to measure cognitive and academic ability, and psychometric tests to measure socio-emotional skills, social norms, and ethnic bias.

“The short-term results look fantastic—fantastic in the sense that we were able to lower high-intensity violence in schools with this program,” Alan says. “We were able to increase inter-ethnic ties—this is the probability of a refugee child making friends with a host child. Ethnic segregation within the classroom declined substantially. We also show that prosociality in both host and refugee children increased: their trust in each other, their trust in other people, and their reciprocity towards each other.”

The curriculum also significantly improved refugee children’s Turkish language ability, which was not an explicit intention of the program. “The program does not teach refugee children Turkish or even encourage that,” Alan says." That was one great result that we were, to be honest, not expecting.” Treated children had scores 0.14 standard deviations higher than the control group on an objective Turkish language test. “Such a remarkable improvement in language ability suggests that creating a peaceful and cohesive learning environment, where inter-ethnic friendship ties are easily formed, is critical to teach migrant children the language of the host country, and as such, a prerequisite for effective integration policy,” the authors note.

These results suggest that the program succeeded in increasing trust and reciprocity among classmates, and also towards peers they do not know. Treated children showed higher levels of altruism and participated in fewer incidents of violence and bullying. “Even more promising is that the program seems to have lessened the social exclusion of refugee children significantly, and helped them form friendship ties with host children and receive emotional and academic support from their classmates,” the authors write. “Taken together, we interpret these results as the program’s effectiveness in increasing cohesion in the school ground by mainly improving children’s perspective-taking ability and reducing their impulsivity.”

While these results are promising, the authors stress the need for longer-term follow-ups. To that end, Alan and colleagues plan to conduct follow-up fieldwork in May 2020. “It is crucial from the policy point of view that these positive impacts persist after students progress into middle school and begin interacting with new classmates in a different environment,” the authors write.

Alan also acknowledges the need to expand and evaluate these efforts to other countries affected by an influx of refugees. “This is a huge humanitarian problem, it’s not just Turkey’s problem. Jordan has the same problem. Lebanon has the same problem. In fact, you see Europe has the same problem at the moment,” she says. Fortunately, the implementation of the program in other settings should be straightforward, as the materials are already developed. But solving this problem doesn’t end with countries currently grappling with the refugee crisis. Estimates show that the number of registered refugees is expected to double over the next twenty years, making clear this is a global issue with global ramifications.