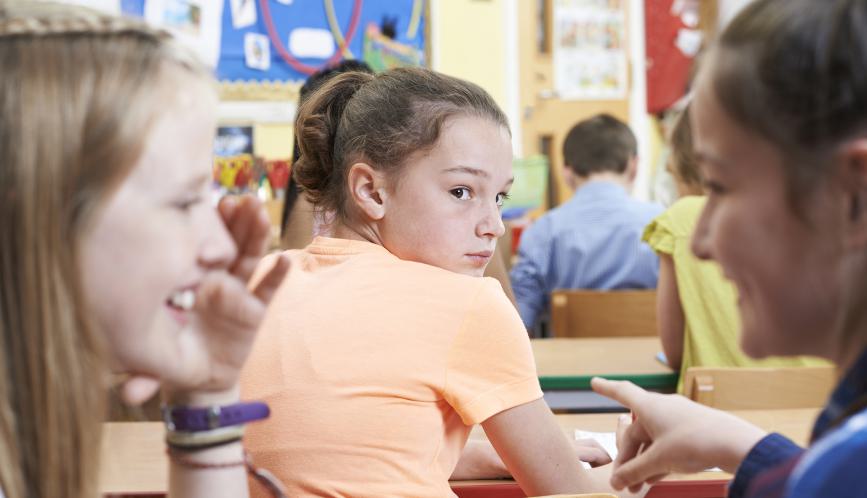 Girl look back at two girls talking, in a classroom

In recent years, new data has alerted us to the severity and frequency of bullying in schools. According to a 2017 OECD report, an average of 11 percent of students stated they were frequently made fun of. Of those frequently bullied students, 26 percent reported relatively low satisfaction with life, and 9 percent reported skipping school “more than three or four times in the two weeks prior.”

While these results show that bullying clearly impacts a student’s education by making it hard to concentrate or making them feel unsafe in class, little research has been done on how bullying can effect a person’s long-term outcomes. In their recent HCEO working paper, Markets network member Colm Harmon and his co-authors Emma Gorman, Silvia Mendolia, Anita Staneva, and Ian Walker look at the long-run effects of adolescent bullying using a cohort of English teenagers.

“The motivation of the study was that there’s a lot of talk about bullying, and we do know that bullying is quite common, but there’s very little quantitative evidence on the causal effect of bullying,” Mendolia says.

The authors used data from the Longitudinal Study of Young People in England, a representative sample of around 15,000 English children born in 1989 and 1990. The students are first surveyed at 13 or 14 years of age, with follow-up surveys conducted up to age 25. The study covers a range of topics, including family relationships, education, attitudes toward school, and labor market variables. In order to study long-term outcomes, the authors look specifically at students’ A-level scores (a high-stakes exam taken during senior year of high school); General Certificate of Secondary Education examinations (a high-stakes exam taken at age 16); having a university degree; earnings; unemployment; and mental health. In addition to the child’s self-reports, the authors use detailed reports from parents to handle potential measurement error.

Mendolia notes that they were surprised by the results. “We didn’t expect to find such a strong result on pretty much all the outcomes,” she says. “The mental health results are definitely the strongest. The effect is really massive, even a little bit more than what we would expect. But it is really a negative phenomenon.”

About half the students in the data report being bullied at some point between the ages of 13 and 16. “As it turns out, being bullied at all does have important impacts on your academic achievement,” Gorman says. The findings show that being bullied reduced the probability of succeeding in the General Certificate of Secondary Education examination by about 10 percent. It also reduced the probability of staying in school past age 16 by about 10 percent.

And the negative effects persist into later life. Being bullied increased the probability of being unemployed by about 30 percent. For those who were employed, being bullied reduced their income by around 2 percent. Gorman confirms that the most striking later-life effect was on mental health. Mental health was measured using the General Health Questionnaire, which is a scale where a higher score indicates poorer mental health.

“At age 25, among those that were being bullied, we found that the effect on mental ill health was very large,” Gorman says. “Mental health problems were increased by about a third of a standard deviation, which is a big effect size.”

These robust results make a strong case for policymakers to focus resources on the more violent and persistent forms of bullying. “It’s really quite a clear picture of the fact that bullying is very negative,” Mendolia says.

As the paper notes, in the UK, “the policy approach to bullying has not been prescriptive.” Thus, responses to bullying across schools vary widely. The authors also note that, according to OECD data, bullying in Britain may be less pervasive than in other countries. The effect on PISA science scores in Britain, “controlling for school fixed effects, is ranked amongst Scandinavian countries and is far below most Western European countries,” they write. “Thus, our results here may have even greater relevance elsewhere in the world.”

“I think this confirms what many people had suspected, which is that that bullying is widespread,” Gorman says. “This work provides new evidence that being bullied does have detrimental consequences for children - both for their academic achievement, but also persisting into their 20s and later life, affecting factors important for life chances such as mental health and economic outcomes.”