Research Spotlight: Gender Representation in Economics Across Topics and Time: Evidence from the NBER Summer Institute 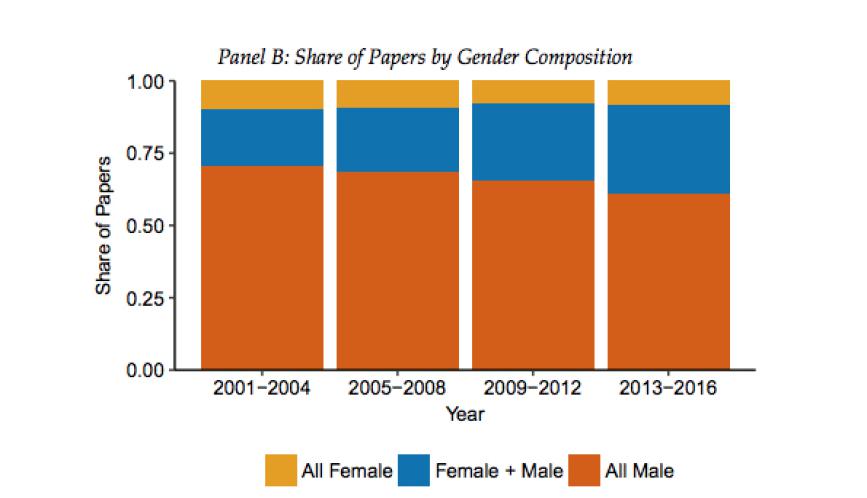 Women have long been a minority in the field of economics. The American Economic Association’s Committee on the Status of Women in the Economics Profession (CSWEP) has been surveying the gender composition of economics departments since 1972. Their annual reports indicate that “from entering Ph.D. student to full professor, women have been and remain a minority.” In recent years, the number of undergraduate women majoring in economics has actually been decreasing. The lack of female representation is exacerbated by what is referred to as the “leaky pipeline,” or the phenomenon that women are less likely to progress along the economics career path. CSWEP reports that, in 2017, “new doctorates were 32.9% female, falling to 28.8% for assistant professors, to 23.0% for tenured associate professors and to 13.9% for full professors.”

Much literature has been devoted to the issue of representation in economics, most of which takes a broad look at the demographic makeup of faculty. A recent HCEO working paper by Anusha Chari and MIP network member Paul Goldsmith-Pinkham[1] takes a more novel approach. The authors document the representation of female economists on the conference programs at the NBER Summer Institute from its inception in 2001 through 2016. This approach is useful for at least two reasons: conference participation can be a valuable professional opportunity, particularly for early career academics, and studying data from the Summer Institute allows for a closer look at gender representation across both time and subfields.

“Rather than thinking about economics as this monolith, there’s this understanding that there are differences in the field of economics in terms of how many women work on different topics,” Goldsmith-Pinkham says. “But it’s pretty hard to quantify that a lot of the time. For any given economist, it’s not listed on their CV or their webpage in some carefully constructed fashion.”

The conference data allowed the authors to study the distribution of women across fields, and their results largely confirmed their prior hypothesis. The Summer Institute takes place annually over three weeks, with programs nestled within the broad topics of finance, macroeconomics/international economics, and microeconomics. The authors write that over the 16-year period, the share of female authors “ticks upwards slightly” from around 18.5 percent in 2001-04 to 20.6 percent in 2013-16. They also found large dispersion across programs. In the 2013-16 period, women authored 14.3 percent of papers in finance, 16.3 percent of papers in macroeconomics and international, and 25.8 percent of paper in microeconomics.

“There really hasn’t been much change over time,” Goldsmith-Pinkham says. “It’s been 16 years, presumably these things would have changed somewhat, but it’s been consistent with results from CSWEP, for example, studying faculty members. It’s been completely static over time.”

The authors used three channels to study what might be influencing representation within the NBER program. First, they used anonymized data on submissions from the 2016 and 2017 NBER Summer Institutes to identify acceptance rates across papers and within each field. “A potential explanation for the low share of women at the NBER may be differences in the acceptance rates between male and female co-authored submissions,” the authors write. “We find that this is not the case.”

Across the three main subfields, macro/international and micro have “statistically indistinguishable” acceptance rates between men and women. For finance, women have a 2 percentage point lower probability of acceptance compared to their male peers. Overall, the paper notes, “this suggests that women are not systematically submitting lower quality papers.”

They also examined the program differences based on the gender of the organizer. Each program is organized by NBER-affiliated economists, who choose the papers for each section. “The estimates suggest a positive and significant effect of about 3.5 percentage points of a female organizer on the share of women featured on a program,” the authors write. However, they point out they “cannot fully rule out reverse causality, namely that as the share of women increases, more women are organizers and featured on the program.”

Lastly, they compare the share of female authors at the Summer Institute to the numbers of female economics faculty, in order to ascertain the pool of potential NBER authors. To do this, Chari and Goldsmith-Pinkham compiled two additional datasets to serve as comparison. One consisted of CSWEP reports, including information on the rank of male and female faculty across institutions. With the CSWEP data, they also tracked over time the share and rank of female professors at the top 10 and top 20 universities, as well as at all economics graduate departments. The second dataset consisted of all NBER members since 1978, with information on gender, institution, and rank, among other information.

These findings hold relevance for anyone interested in improving the representation of women and other minorities in economics or other STEM fields. “To some extent, these things happen implicitly because, for example, men tend to know men and they’re the first person that they think of and so then they’re going to just invite other men,” Goldsmith-Pinkham says. “You have to sort of take an active role to make sure it doesn’t just stay an inside club, even if you’re not explicitly doing it per se.”

The NBER Summer Institute is an elite, highly visible economics program. While NBER takes pains to contact all doctoral economics departments for submissions, the findings of this paper “suggest that either information or some other barriers may influence the probability of submission.”

Goldsmith-Pinkham admits there is an economic tradeoff to increasing submissions, as it makes more work for organizers. Will increasing submissions generate enough high-quality entries to make the endeavor worthwhile? “In this context, if there are people who are not submitting who would really benefit, who are certainly good enough or above the bar, because of something else culturally or in society, or they don’t know about it - then that’s potentially quite valuable,” he says. “My main takeaway from working on this a lot has really been: how can we make sure that we’re not building up walls that keep women and underrepresented minorities from being able to get into these types of clubs?”

The economist Justin Wolfers wrote about this issue in the New York Times earlier this year, noting the small fraction of female economics faculty and the decline in female economics undergraduates, a number that peaked in the 1990s. “That pattern would be disturbing in any academic field but because economics has an outsize influence on public policy, it means that many important debates are likely to be dominated by men’s voices for years to come,” he writes.