Research Spotlight: Melding a Model and Data to Estimate the Impact of COVID Learning Loss 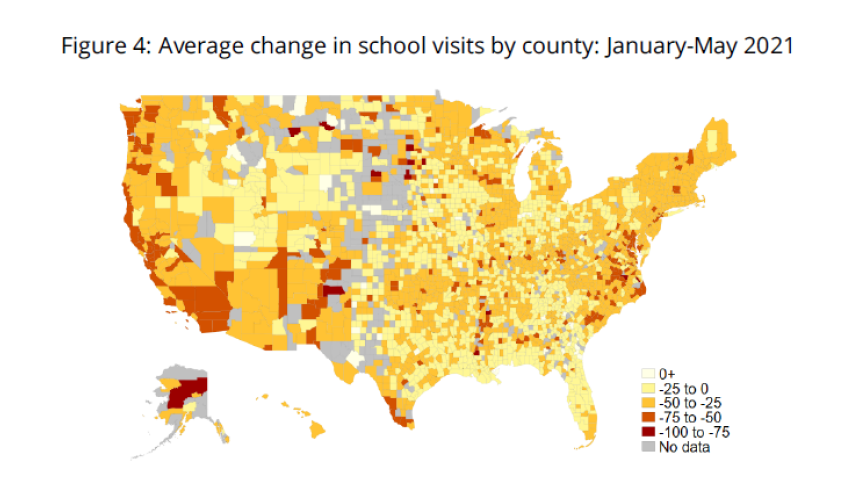 When COVID began shutting everything down in March 2020, like many economists, Dirk Krueger began writing papers on the short-term economic impact of the crisis. “When unemployment was at 15 percent, that seemed to be the big thing,” he recalls.

But as a parent, his attention soon shifted to an issue closer to home. Observing what his children experienced as schools closed and they shifted to online learning, he started to worry about a decline in their human capital accumulation—and a research project was born.

Krueger, a member of the HCEO Markets network, and his coauthors have since produced two working papers estimating the long-term economic impact of school closures on students' welfare and future earnings. Hoping to be reassured about his childrens’ future, he instead found reason to be more concerned.

Deploying a structural model of human capital accumulation, estimates on the effectiveness of remote learning, and a clever application of cell phone activity data to quantify the extent and special distribution of  school closings, the team estimated that today’s students would indeed learn less today and earn less in the future. Extending the school term into the summer for the next two years would reverse some—but not all—of that loss.Increased tax revenues from higher earnings would pay for the cost of these additional summer sessions, they found.

Driven by parental concern, the research team started studying the impact in the summer of 2020, after the the school year ended still in distance learning mode.“It seemed pretty clear to me that not a lot of learning was going on virtually, and how long the school closures would last was up in the air,” with the possibility that schools would not reopen in the fall on the horizon, recalls Krueger, a professor of economics at the University of Pennsylvania, recalls

They found that parents’ increased time and resources spent supporting their children’s at-home learning could reduce the negative impact of the school closures—but this does not fully offset it. Not surprisingly, the negative impact on students’ welfare would be worse for those children with parents with lower educational attainment and fewer resources to support at-home learning.

The school closures themselves are the primary driver of learning loss. Parents’ pandemic-induced income reductions play a contributing, but secondary role, by reducing parental ability to invest in children and finance college educations.

This paper studied a period when virtually all schools were closed. When the fall semester drew near, some heterogeneity began to emerge. “On the east and west coasts, it was clear schools would remain closed into the new school year; in the heartland, the COVID cases were not so bad, and schools reopened,” rueger said. In 2021, the picture changed as infection patterns reversed, with regional variations in whether schools were teaching in person, online, or in a hybrid mode.

To estimate the impact of learning loss under those varied conditions, the team needed to pair their model with solid data on how schools were operating. They found it by teaming up with André Kurmann and Etienne Lalé, who had used cell phone data for evidence of business closures and economic activity. This collaboration led to a second paper: The Fiscal and Welfare Effects of Policy Responses to the Covid-19 School Closures.

The team analyzed data from Safegraph, a company that collects cellphone pings from 6 million places of interest (POIs) across the US. Matching these data with locations of schools yielded weekly cell phone activity data on approximately 102,500 schools across the nation. Analysis of this data revealed that school visits dropped by almost 100 % at most POIs from March to May 2020, indicating that schools had in fact shut down. “Over the fall of next year, we documented that more and more students were returning to the schools,” Krueger said. 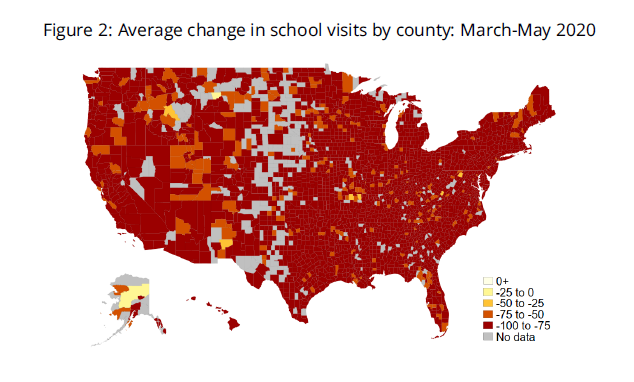 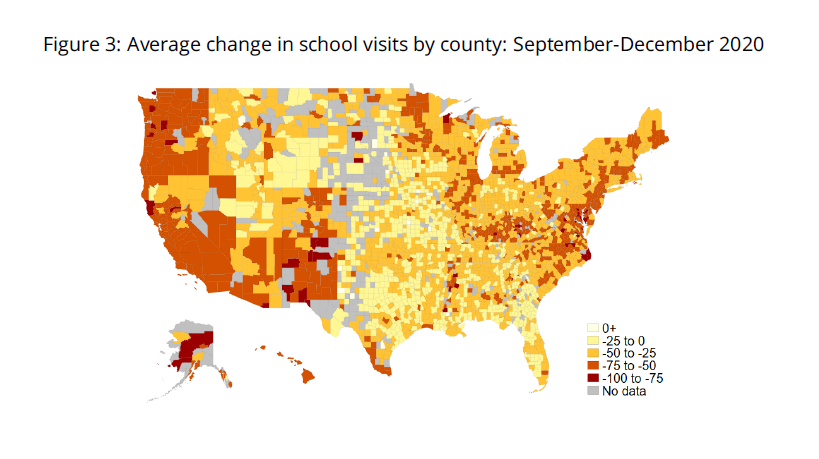 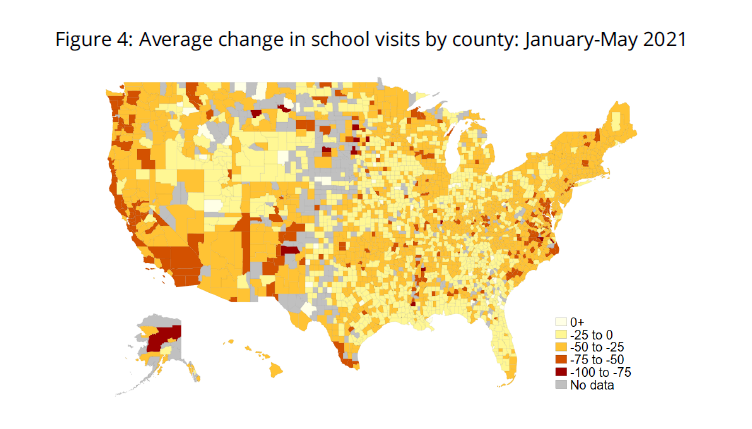 To map the change in school visits into a measure of effective in-person learning, the team matched it to a second dataset from a company called Burbio. This provided county-level information on whether schools were teaching fully in person, remotely, or a hybrid of the two. Regressing this data against school visits based on cell activity, they were able to estimate the fraction of time students spent in each learning mode during the entire period from March 2020 to the fall of 2021.

Another key step was to come up with an estimate of how much students actually learn online. There is wide latitude for variance in the quality of online instruction, and more work needs to be done to refine this, but after consulting the best available evidence, the team used estimates that made virtual learning 0%-to 50% as productive as in-person classes, and analyzed the impact of school closures under these alternative assumptions on the effectiveness of online learning.

In the data, the authors found that secondary schools were closed longer than elementary schools, and that private schools and those in poorer counties experienced shorter closures. Using their structural model to account for children’s decisions to complete high school and pursue a college degree, parental investment and transfers, and many other factors, they then quantified the long-term impact of school closures on children.

The model predicts that all students will see a decline in future earnings and welfare losses, but the decline is steepest for those who just started public secondary schools at the start of the pandemic. Two offsetting factors explain this, Krueger says.

Years of early childhood research by Heckman, Cunha and others has shown that education in the earliest years is critical, and new knowledge builds on old, Krueger noted. Therefore, “the younger the child, the worse the total learning loss is over time. But when we looked at the data, primary schools did much better at staying open. Since secondary schools were closed much longer, it is the youngest of the secondary students who were out of the classroom for extended periods, and thus will suffer the greatest loss in foundational learning.

Closing schools and shifting to online learning was massively expensive for school systems, and the closure of schools was a burden for working parents. Krueger stresses that these two papers only estimate the costs to students over time without fully considering these costs Nor, importantly, do they calculate the benefits of school closures, in terms of health and lives saved by minimizing viral exposure.

In the spring of 2021, the Biden administration floated the idea of keeping schools open into the summer to make up for disruptions to learning. The research team then applied their model to that potential policy intervention to estimate whether it would reverse losses.

They found that adding a total of three months of summer sessions over the next two years would raise the welfare of children and partially but not completely compensate for the losses due to the Covid-19 school crisis. “They will be higher earners, and they will be paying higher taxes, so extending school would be slightly positive in net present value for the government, too, especially when it is possible for the state to borrow at close to zero interest rates,” Krueger says.

Despite the finding of potential gains, Krueger is realistic about the potential of implementing summer school or shortening the summer breaks in the US (this is standard in his native Germany, where summer vacation only lasts for 6.5 weeks). High costs, teacher shortages, and resistance from already overextended educators and possibly from teachers’ unions.

Still, Krueger is concerned enough about the impact on children—especially students from socioeconomic groups already at a disadvantage—that he is sharing his evidence in an NBER video, talks at the International Monetary Fund, and at other conferences to “try to move the needle on policy.”

“It’s urgent. I am a Cunha and Heckman fan, and they’ve shown over and over again that you have to intervene early. If you wait 10 years, the impact will be less, and the longer we wait, the harder it will be to help students to make up what has been lost due to the Covid-19 crisis.”