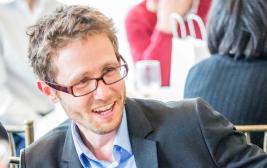 Itai Sher is an Associate Professor of Economics at the University of Massachusetts Amherst. His research is at the intersection of ethics and economics. His primary focus is on incorporating broader ethical criteria into formal economic evaluation. Sher’s recent work has included topics such as the normative assessment of tax policy, freedom of choice, voting institutions, and value pluralism in normative economics. His work has appeared in economics and interdisciplinary journals such as The Journal of Economic Theory, The Economic Journal, Theoretical Economics, Games and Economic Behavior, Social Choice and Welfare, Politics, Philosophy & Economics and The Proceedings of the National Academy of Sciences.

Sher is a co-Editor of the journal Economics & Philosophy and also of the Oxford University Press Philosophy, Politics, and Economics Book Series. He is a founder and co-organizer of the interdisciplinary conference series Normative Ethics and Welfare Economics.