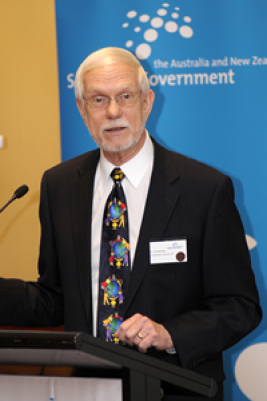 Joseph Sparling, Ph.D., is an Honorary Professorial Fellow at the Melbourne Graduate School of Education at the University of Melbourne (Australia) and a Fellow at the Frank Porter Graham Child Development Institute at the University of North Carolina. Professor Sparling's 50-year career has been focused on bringing educational opportunities to needy families with children from birth though age 5. With Professor Craig Ramey, he developed an early educational program known as the Abecedarian Approach. Over a period of 40 years, the Abecedarian Approach has been studied in 15 randomized samples. The studies have been conducted by colleagues in 10 universities including Harvard, Yale, and Sanford. This body of research has shown that educational support exemplified in the Abecedarian Approach in the first 5 years of life results in long-lasting improvement in the school and life achievement of at risk and vulnerable children. In the 5 years immediately following the Romanian revolution, Sparling worked in Romanian orphanages and demonstrated that the Abecedarian Approach could be effectively applied even in these under-resourced environments. Currently, Professor Sparling is Director of the 3A (Abecedarian Approach Australia) Project that provides professional development for Aboriginal child and family services to assist them in implementing the Abecedarian Approach. This work is supported by state governments and non-governmental organizations in Australia. He also continues to work with provincial governments and non-governmental organizations serving First Nations peoples in Canada. In addition to scholarly articles, Sparling is the author of LearningGames and Conversation Books, educational resources for parents and teachers of very young children. His early career experience includes work as a public school teacher and principal.

Sparling received a B.S. in Science Education and M.S. in Curriculum Development from the Florida State University  in 1957 and 1958 respectively and a Ph.D. in Educational Psychology from the University of Michigan at Ann Arbor in 1968.