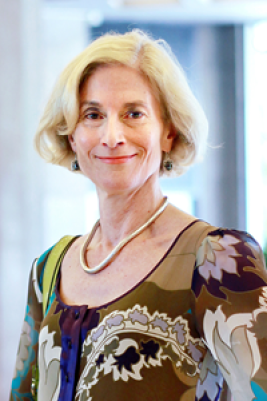 Professor Martha Nussbaum is the Ernst Freund Distinguished Service Professor of Law and Ethics, appointed in the Philosophy Department, Law School, and Divinity School. She is an Associate in the Classics Department and the Political Science Department, a Member of the Committee on Southern Asian Studies, and a Board Member of the Human Rights Program. She is the founder and Coordinator of the Center for Comparative Constitutionalism.

She has taught at Harvard, Brown, and Oxford Universities. From 1986 to 1993, Ms. Nussbaum was a research advisor at the World Institute for Development Economics Research, Helsinki, a part of the United Nations University. She has chaired the Committee on International Cooperation, the Committee on the Status of Women of the American Philosophical Association, and the Committee for Public Philosophy. She has been a member of the Association's National Board. In 1999-2000 she was one of the three Presidents of the Association, delivering the Presidential Address in the Central Division. Ms. Nussbaum has been a member of the Council of the American Academy of Arts and Sciences, and a member of the Board of the American Council of Learned Societies. She received the Brandeis Creative Arts Award in Non-Fiction for 1990, and the PEN Spielvogel-Diamondstein Award for the best collection of essays in 1991; Cultivating Humanity won the Ness Book Award of the Association of American Colleges and Universities in 1998, and the Grawemeyer Award in Education in 2002. Sex and Social Justice won the book award of the North American Society for Social Philosophy in 2000. Hiding From Humanity won the Association of American University Publishers Professional and Scholarly Book Award for Law in 2004. She has received honorary degrees from forty colleges and universities in the U. S., Canada, Asia, and Europe, including Grinnell College, Williams College, the University of Athens (Greece), the University of St. Andrews (Scotland), the University of Edinburgh (Scotland), Katholieke Universiteit Leuven (Belgium), the University of Toronto, the Ecole Normale Supérieure (Paris), the New School University, the University of Haifa, Emory University, the University of Bielefeld (Germany), Ohio State University, and Georgetown University. She received the Grawemeyer Award in Education in 2002, the Barnard College Medal of Distinction in 2003, the Radcliffe Alumnae Recognition Award in 2007, and the Centennial Medal of the Graduate School of Arts and Sciences at Harvard University in 2010. She is an Academician in the Academy of Finland. In 2009 she won the A.SK award from the German Social Science Research Council (WZB) for her contributions to "social system reform," and the American Philosophical Society's Henry M. Phillips Prize in Jurisprudence.

Her publications include Aristotle's De Motu Animalium (1978), The Fragility of Goodness: Luck and Ethics in Greek Tragedy and Philosophy (1986, updated edition 2000), Love's Knowledge (1990), The Therapy of Desire (1994), Poetic Justice (1996), For Love of Country (1996), Cultivating Humanity: A Classical Defense of Reform in Liberal Education (1997), Sex and Social Justice (1998), Women and Human Development (2000), Upheavals of Thought: The Intelligence of Emotions (2001), Hiding From Humanity: Disgust, Shame, and the Law (2004), Frontiers of Justice: Disability, Nationality, Species Membership (2006), The Clash Within: Democracy, Religious Violence, and India's Future (2007), Liberty of Conscience: In Defense of America's Tradition of Religious Equality (2008), From Disgust to Humanity: Sexual Orientation and Constitutional Law (2010), Not For Profit: Why Democracy Needs the Humanities (2010), and Creating Capabilities: The Human Development Approach (2011). She has also edited fourteen books. Her Supreme Court Foreword, "Constitutions and Capabilities," appeared in 2007 and will ultimately become a book to be published by Harvard. Her current book in progress is Political Emotions: The Public Psychology of a Decent Society; it is under contract to Harvard.