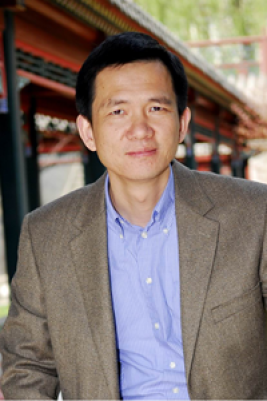 Professor, the China Center for Economic Research (CCER) and the National School of Development (NSD), Peking University. He currently serves as the director of CCER and deputy dean of NSD in charge of academic affairs and the editor of the center's house journal China Economic Quarterly. His research interests include economic transition and development in China.

He has published widely in international and domestic journals as well as several sole authored and coauthored books on institutional economics and economic development in China including Equity and Social Justice in Transitional China (Renmin University Press, 2004), Globalization and Economic Growth in China (co-editor, World Scientific, 2006), CSR and Competitiveness in China (co-author, Foreign Languages Press, 2009), Reform and Economic Growth: What Can China Offer to the World? (co-editor, Taylor & Francis, 2010), and Economic Reform and Institutional Innovation (Gale Asia/Cengage Learning, 2009). He is an associate editor of Agricultural Economics and serves in the editorial boards of several domestic and international journals. He is also a prolific writer for magazines and newspapers.

He was awarded the 2009 Sun Yefang Economics Award --- the highest economics award in China, the 2008 and 2010 Pu Shan Award in International Economics and the 2008 Zhang Peigang Award in Development Economics. He was awarded the title of Best Teacher by the Peking University Student Union in 2006 and was named a Young Leader by the Nanfang People Weekly in 2008.

Dr. Yao received a B.S. in Geography and M.S. in Economics, both from Peking University in 1986 and 1989 respectively, and a Ph.D. in Agricultural and Applied Economics from the University of Wisconsin-Madison in 1996.

Keynote: Inequality and the Middle-Income Trap