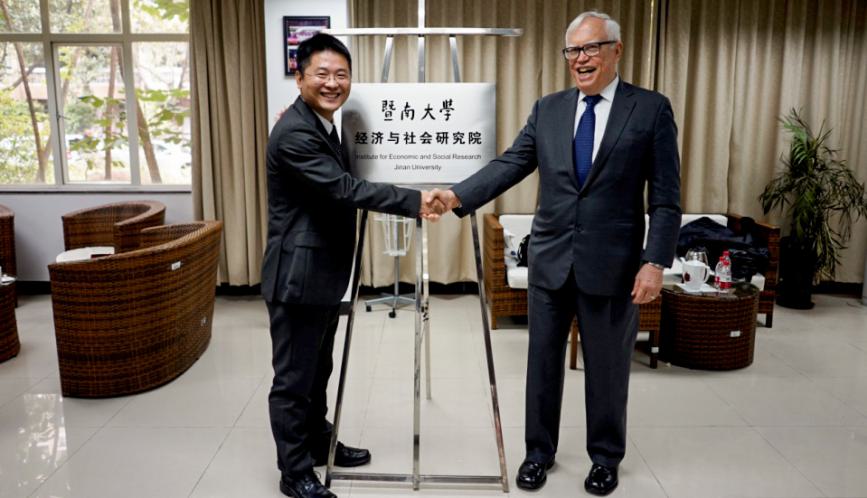 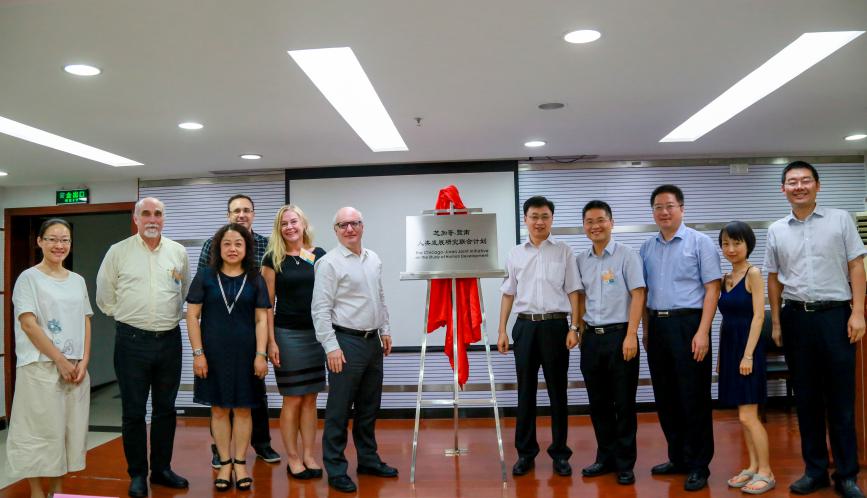 We are pleased to announce that the Center for the Economics of Human Development (CEHD) is partnering with the Institute for Economic and Social Research (IESR) at Jinan University on collaborative research exploring human flourishing.

HCEO Co-Director James J. Heckman, Henry Schultz Distinguished Service Professor at The University of Chicago, who leads CEHD, and Shuaizhang Feng, Professor and Dean of IESR, will co-direct the effort. It will be housed at Jinan, which will serve as a research home for both IESR and CEHD students and faculty, as well as for visiting scholars from a broad array of guest institutions.

The study of human flourishing examines the circumstances under which people are able to develop the skills needed to thrive in our current economy. The UChicago-Jinan Initiative will focus particularly on the context of China and facilitate academic exchange between the two universities. The inaugural joint program will be a faculty training seminar, to be held at IESR, June 25 through June 29, 2018. The seminar will foster international collaboration between US and Chinese starting faculty and post-doctoral scholars working in economics.

“CEHD embraces this opportunity to work with top Chinese scholars at Jinan who are conducting important empirical studies of Chinese economic and social development,” Heckman said. “We look forward to collaborative efforts in creating rich new databases to understand the economy and the society, as a guide to designing effective social policies.”

This formalized partnership continues an established relationship between the two institutions. Since 2016, IESR and the Human Capital and Economic Opportunity Global Working Group, a CEHD initiative, have co-hosted a Summer School on Socioeconomic Inequality at Jinan. In addition to the Summer School, IESR and CEHD have co-hosted conferences through CEHD’s Asian Family in Transition Initiative. The summer school will continue under the auspices of this effort, as will other academic programming.

"Jinan is committed to building a world-renowned economics research team. Needless to say, there is much to learn from a top program such as the University of Chicago, and a joint research will serve this purpose very well,” said Jinan University President Xianzhong Song.

Amanda Woodward, Dean of the Division of the Social Sciences at UChicago and the William S. Gray Distinguished Service Professor, said, “This partnership allows the transformative research for which Professor Heckman is globally recognized to impact further generations of scholars, students, and children. It is exciting that CEHD is undertaking such an expansion of its efforts.”

The joint initiative will promote scholarship through collaborative conferences and workshops, faculty and researcher visits, joint research projects, and an international fellow program. In further collaborations, CEHD and IESR will offer joint positions for full-time research staff and post-doctoral scholars, with time at both institutions. Shared research projects will include the Longitudinal Study of Children’s Development in Mianzhu. “China has been experiencing tremendous changes in a very fast pace, and I think it is important to understand and make sense of this important reality," Feng said.

"This new partnership between the UChicago's CEHD and Jinan's IESR is an extraordinary opportunity to expand numerous frontiers of social science research,” said Steans Professor in Educational Policy at the University of Chicago Harris School Steven Durlauf, who is also the Associate Director at CEHD. “Each research group will enrich the other and will help build an authentic international community of scholars."

IESR has already been actively involved in academic and policy research regarding China's estimated 100 million migrant children and left-behind children. Feng expects that "with future collaborations with CEHD, we will make contributions to the basic science of child development as well as to policy discussions that have the potential to help hundreds of millions children and their families."

The joint initiative will add to UChicago’s international presence. In Asia, the University has an academic center based in Hong Kong, in addition to its center in Beijing.