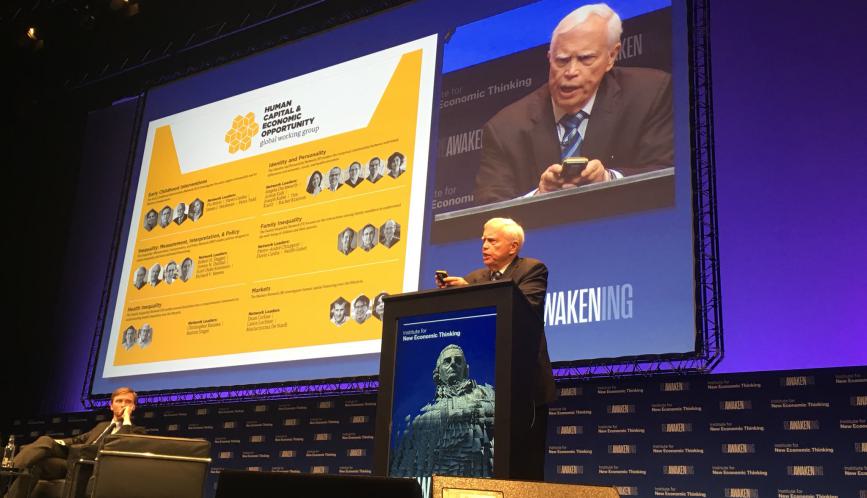 During the lecture, Professor Heckman discussed the work of HCEO, including several areas of his research which focus on different aspects on inequality and human capital formation. He noted the great advances that have been made in our understanding of what human capabilities matter for success in life.

"We know that gaps in skills begin very early, before age 3," he said. Despite this knowledge, he noted, current policy discussions around skill formation have a fragmented quality.

"People talk about inconvenient truths, it’s not just global warming," Heckman said, regarding the persistence of inequality. He then focused on the importance of environment on child development, which he called a huge issue.

He noted the vast gaps in the number of words that are spoken to children from different socioeconomic backgrounds. Families with high SES read on average 3-4 times as many words to their children as do their lower-SES counterparts. "And the style of parenting is different," Heckman said. "So the environments in which children are immersed are very different, and this leads to substantial differences."

He concluded with a call to focus investments on children most in need. "If we invest today in the base capabilities of disadvantaged children, there is a huge return," he said. Heckman has documented this rate of return in previous research, including his recent HCEO working paper, "The Life-cycle Benefits of an Influential Early Childhood Program."

"What is the common ingredient of successful interventions? Enhanced parent-child engagement," Heckman said.

You can learn more about the INET conference here.