Introduction to Networks SSSI 2016 Chicago
The Dynamics of Stigma 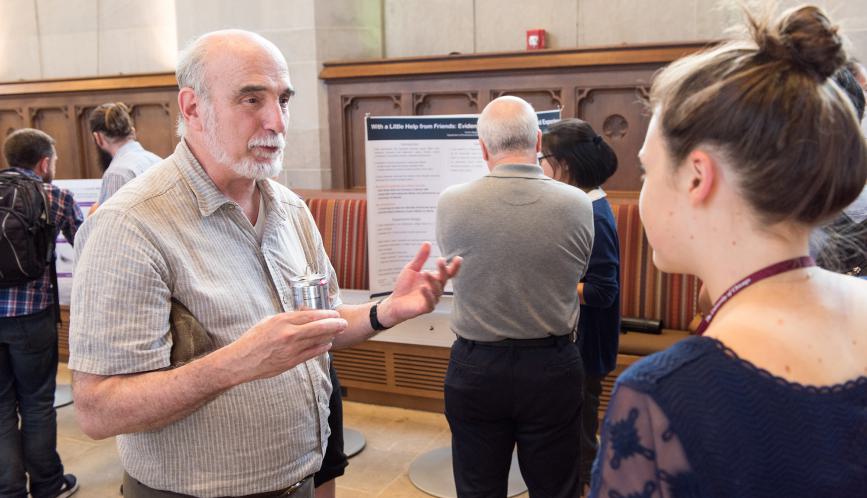 Professor Lawrence Blume at a conference.

Lawrence Blume is a member of our Inequality: Measurement, Interpretation, and Policy network and has been a faculty member of HCEO's Summer School on Socioeconomic Inequality Chicago for the past three years. He is Goldwin Smith Professor of Economics at Cornell University, a Visiting Research Professor at IHS, and a member of the external faculty at the Santa Fe Institute, where he has served as Co-Director of the Economics Program and on the Institute's steering committee. He teaches and conducts research in general equilibrium theory and game theory, and also has research projects on the theory and measurement of behavior in social networks.

Describe your area of study and how it relates to policy discussions surrounding inequality.

I’m an economic theorist. My theoretical research revolves around problems in game theory and general equilibrium theory, and I’m also interested in social networks. All of these things have a role in studying the economics of inequality. I’m particularly interested in looking at the interface between economic theory and econometric practice, thinking about how we can build models and take them to data and use theoretical reasoning to uncover useful structural models, clever identification strategies, and the like.

You’ll get a different answer to that question depending on what the person’s currently working on, right? For me, I am struck by the massive amount of descriptive work we have on inequality. We know all kinds of facts about inequality. On the other hand, we are poverty-stricken ourselves when it comes to having explanations for these facts, in particular having useful things to say about large-scale policy interventions. We have much more to say about small-scale interventions, but any situation where the general equilibrium effects become huge, we’re basically at sea. This actually inspires an entire research agenda involving both theory and praxis, and involving building both useful theoretical models and appropriate econometric technique, in order to actually be able to make causal claims.

If you listen, for example, to Hendren’s lecture here [at SSSI], all this work that Hendren has done with Raj Chetty and his co-authors on the effects of place on inequality. Place itself, geographical coordinates can’t be causal. This is an example of research that is just crying out for theoretical and empirical work to uncover the mechanisms that could be at work. They’ve already controlled for all the obvious co-variants, yet nonetheless we see these huge effects. This is an example of where we need more theorizing that should lead to more and better empirical studies. This research is purely descriptive, and I just love it because it puts so much on the table and everybody should just start digging into it.

So much. Much of what I have to say goes to any graduate student working anywhere in economics. Number one, the first question you have to ask yourself about what you’re working on is: Is it really interesting, who’s going to care? I see so many papers where students are assiduously working on extending a new technique, pushing a model a little further, and then I ask the student: Let’s imagine that this research works out even better than you could expect, you killed the question, so on and so forth. Where would you publish the paper, who’s going to read it? Frequently people have no answer. They say, well, I’ve answered my question. So why is it the right question? I think people need to spend a great deal of time thinking about what they want to do and why they want to do it. Choice of project is really important, in particular for getting a first job and making an impact early in your career. I also think that there’s an upper bound on this, but people should not be afraid to really push the envelope and be innovative. I tell my students at Cornell that the first paper on any topic can be bad. The second paper has to be good, if it’s a topic that catches on. But the first one doesn't have to be so good. It’s easier to write those, than to really figure out how to do something better than what five other people have already done on a particular question. I really want to push people to try and be innovative.

For people who are doing empirical research, in general the journals favor research that actually establishes causal claims, that actually establishes explanations. One has to think very hard about how to do that. I am very disappointed in much of the empirical research that I see because I don't think that people actually do an adequate job of defending why they have succeeded in making a causal claim and providing an explanation. The reason I think people often fail is that - and I’m now quoting the words of Jim Heckman - causality is a property of a model. When you’re engaging in your research, you have some kind of model in the back of your head. That model often never, ever appears in the paper. Frequently you’ll see traces of it during a talk, but it never appears in print. Yet we can’t really evaluate the causal claim without knowing what perturbations are being thought about. All of our theories of causation, or theories of perturbation, we say that A causes B, if when you jiggle A, something happens to B. You have to tell something about that mechanism. This is the thing that often is missing. I don’t know what the mechanism is, and without knowing what the mechanism is, it's hard to evaluate. Identification, for example, it’s a hot topic. Identification again, is really a property of a theoretical model. Think about instrumental variables, the claim that something is a good instrument is in fact a theoretical claim because you’re making statements about the nonexistence of certain kinds of causal channels. It’s important to really be precise about that, at least precise enough to be convincing. Unfortunately competition for journal space is such that these frequently get squeezed out of papers, in particular when the paper itself is very complicated. I think that people really need to fight to make themselves clear on what their implicit theory is. Don’t leave it implicit, make it explicit. That doesn’t mean having equations all over the place. It could just be a good paragraph of chat, but I want to know how you’re thinking about things and I often don’t see it because we jump very quickly from some introductory material to looking at the data to the estimation technique. I’m left wondering why I care.