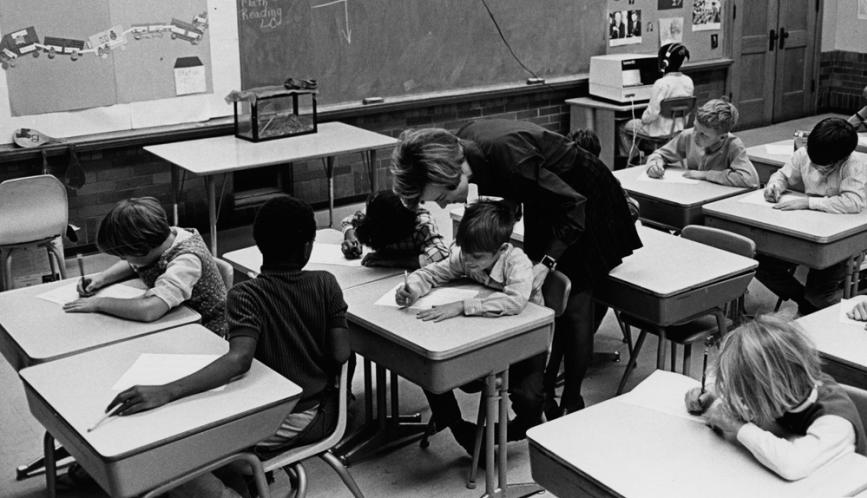 The gender gap in leadership positions has persisted well into the 21st century. In many cases, women’s representation in top jobs has actually fallen. In 1997, the U.S. ranked 52nd in the world for female representation in government, Vox reports. By 2016, it had fallen to 97th place, with less than 20 percent of congressional seats held by women. In 2015 women were 4.8 percent of S&P 500 CEOs, Fortune notes. Last year that number fell to 4.2 percent, with only 21 companies run by women.

IP network members Sule Alan and Seda Ertac and their co-authors Elif Kubilay and Gyongyi Loranth look at this long-standing issue in the HCEO working paper, “Understanding Gender Differences in Leadership.” The authors note that recent literature, by Ertac and Gurdal, has shown “women are less willing than men to make decisions on behalf of others,” which is a major component of a leader’s job. The researchers explore this facet of leadership in the paper.

Using data from a large-scale field experiment involving 9- to 10-year-old children and 13- to 14-year-old adolescents, the authors study “the evolution of gender differences in the willingness to assume the decision-maker role in a group.” They call this measure the leadership choice. “We show that while there is no gender difference in the willingness to make risky decisions on behalf of a group in a sample of children, a large gap emerges in a sample of adolescents,” the authors write, which is consistent with findings in adults.

“If women are less willing than men to take this type of responsibility, and less willing to face public scrutiny for some reason...this would partly explain why we have so few women in these jobs,” Alan says. “What we do in this paper is ask the question: Is this actually innate?”

The researchers used two cohorts of students, fourth-graders and eighth-graders, from state-run schools in Istanbul. In the elementary school, they created an “artificial environment,” Alan says. Grouped in units of three, the fourth-graders were asked who wanted to lead the group and be tasked with making a risky investment decision. “The goal of the task is to construct a setting where one person’s decision determines everyone’s payoffs, thereby capturing the responsibility that is oftentimes attached to leadership,” the authors write. With this task, the researchers learn “individuals’ willingness to make the decision on behalf of the group.”

Studying data from this sample, the researchers found no gender gap in the willingness to be a leader. “If you look at children, you see absolutely no difference in taking responsibility for the group,” Alan says. “About 76 percent of the kids actually want to be the leader. And there’s absolutely no gender gap.” The researchers then wanted to find out when the gap appears. “The obvious place to look at is puberty,” Alan says. “There’s a lot of work on gender differences that says much of the differences usually appear in the puberty/teen years, when the hormones are surging and gender roles become more salient.”

So they ran the same experiment in middle schools that share a campus with the elementary school, meaning that the sample of students was similar in background. “We went to the middle schools to do exactly the same thing we did for the children, and we find a quite large gap,” Alan says. “While leadership willingness declines going from childhood to adolescence for both girls and boys,” the authors write, “a large gender gap of 18.5 percentage points emerges in favor of boys.” The willingness of girls to lead drops by 30 percentage points in the teen years.

To find out why this was happening, the researchers measured the participants’ social confidence. The students were asked if they would be willing to solve a math problem on a chalkboard in front of the class.

“We document that there is about an 8 percentage-point gender gap in social confidence in childhood already, and this gap becomes very large (about 25 percentage points) in adolescence,” the authors find. “Even after controlling for ability, risk tolerance and private self-confidence, girls are 22 percentage points less likely to accept to perform the mathematical task on the board in front of their peers.”

According to Alan, the girls in the study did not want to test their ability in public. “Failing seems to be psychologically much costlier for them,” she says. Yet their actual ability had nothing to do with their social confidence. In one sample, the researchers made all students complete the task on the board, which allowed them to see if the students’ actual skill level affected their social confidence. “There’s absolutely no gender gap in the performances,” Alan says. “If anything, in middle school, girls are slightly better than boys. This is a very important efficiency issue.” The inefficiency is in fact at the heart of why economists are interested in gender differences. “When you lose an able person,” Alan says, “the economy is hurt because then the talent is misallocated.”

Their findings have important policy implications for potentially closing this gender gap. “Understanding the forces behind self-selection into leadership positions is an important step toward designing effective policies that can mitigate inefficient gender gaps in labor markets as well as in corporate or political decision-making,” the paper notes. “Policies and interventions such as exposure to female role models in leadership positions or in occupations subject to public scrutiny may be especially effective for girls in adolescence, which is when social fears seem to arise and contribute to gender gaps in choices.”

“In childhood we observe them [girls], they are just so like boys, they want to do everything,” Alan says. “Something happens when they hit puberty, and then they just lose this confidence and image problems become real problems.”

An earlier paper by Alan, Ertac, and Teodora Boneva also provides some educational recommendations for leadership. It found that classroom interventions can be effective at fostering persistence and other gritty behavior in elementary school students. For adult women, Alan recommends “creating female-friendly work environments” which can help women advance in their fields. “In academia, for example in economics, when there are more female faculty as role models and mentors, it is easier for younger women to be successful,” she says.

Indeed, the recently released 2016 Survey Report of the Committee on the Status of Women in the Economics Profession found the U.S. made some gains in the field. Female economists made up 13 percent of full professors, an increase four times higher than the number in 2000. At doctoral-granting institutions, women more than tripled their representation among new Ph.D.’s, to 31 percent. However, the report states that the “most striking finding” is that “the share of women receiving Ph.D.’s and becoming assistant professors in research-oriented economics departments has stagnated over the last decade.”

As the paper states, having more women in positions of power may help instill social confidence in the next generation of young women. Vox’s study of women in politics makes the same argument, finding that in countries with more female legislators, “young women were more likely to participate in politics and have political discussions, and that young women expressed a greater interest in becoming politically active in the future.” In the end, governments and corporations alike must commit to diversifying their leadership, or they will continue to miss out on the skills of some of society’s most competent people.

Thanks to Sule Alan, Seda Ertac, Elif Kubilay, and Gyongyi Loranth for their assistance in completing this article.