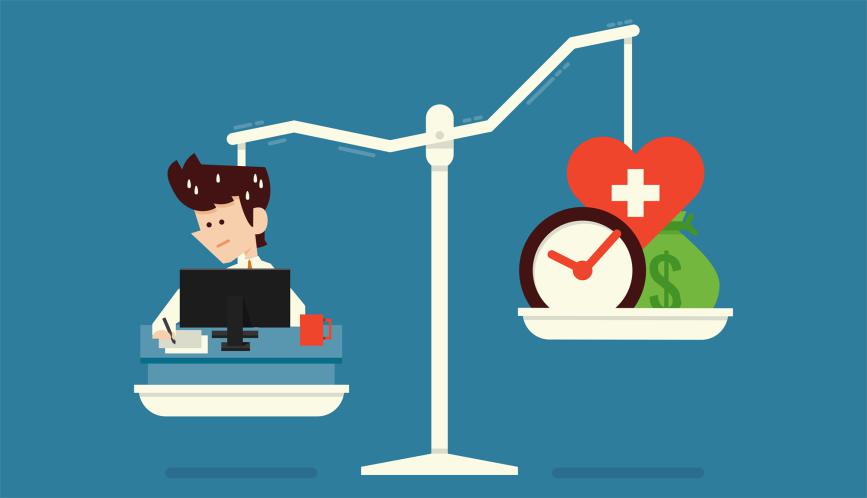 Scale weighing a man on his computer on one side and a clock, a heart, and a money bag on the other side

Perceptions of fairness play an important role in labor market relations and affect market efficiency. While most of the previous academic studies have focused on behavioral effects, new work by IP network leader Armin Falk, IP network member Fabian Kosse, and their co-authors shows a strong link between unfair pay and heart rate variability (HRV). HRV is a stress-related early indicator of impaired cardiac autonomic control which has been shown to predict coronary heart disease. The implications of these findings could be considerable. According to the Centers for Disease Control and Prevention, one in every three deaths in the U.S. is related to cardiovascular diseases.

Falk and Kosse, both economists, partnered with three medical sociologists to develop a two-tiered study. First, they used a controlled principal-agent lab experiment to test how revenue allocation affected agents’ HRV. The experimenters further tested their hypothesis using observational data from the German Socio-Economic Panel (SOEP), a large panel study that is representative of the adult population of Germany. Kosse says the researchers were looking for physiological responses to perceptions of unfair pay. “We are asking: is there something on top of the typical behavioral economics effects, if you pay someone an unfair-low, or fair-high wage? Is there something which goes above the behavior? Is there a feedback directly from the body?” he says.

The findings between the two approaches were overwhelmingly similar. For the lab experiment, agents (or employees), produced revenue based on a tedious task (counting zeroes on a sheet of paper and entering the data into a computer.) At the same time, principals (or employers), were free to do what they liked with that time. After the agent had “worked” for 25 minutes, the principal decided how to split the revenue between himself and his employee. All subjects were male college students. In the end, no agent received more than the amount deemed to be objectively fair by a separate group of subjects. On average the workers produced a revenue of 20.93 euro and received a pay of 9.53 euro. Throughout the experiment, the researchers recorded the HRV of the agents. As the authors note, “Low heart rate variability is observed during states of mental stress while enhanced heart rate variability occurs during states of mental relaxation.” Analysis of the heart-rate data indicated that “HRV reacts negatively toward being treated in a more unfair way, i.e., fairness systematically affects the autonomic nervous system.”

In light of their findings, the authors focused the next part of the experiment on diseases related specifically to the cardiovascular system. Using information from the SOEP, the researchers found a strong association between perceptions of unfair compensation and “lower subjective general health status.” The SOEP data has respondent information about both general health outcomes and specific diseases, and about labor market status and their perceptions of the fairness of their pay. The data showed that unfair pay perceptions corresponded specifically to heart disease. “No such relation is observed for diseases which are mostly unrelated to the cardiovascular system as, e.g., cancer,” the authors note.

“The long-run findings exactly fit to what we find in the short-run in the lab,” Kosse says. “When both approaches fit that nicely together, I think it is very convincing.” Both models, the authors write, indicate significant “negative effects of unfair wage on subjective health status.” By their estimate, the effect of receiving unfairly low wage on health status is equivalent to “an increase in age between 2.5 and 10 years and exceeds the effects of a 1000-Euro-decrease in monthly net wage.”

The study’s findings are significant for a number of reasons. Most aspects of low wages are part of the market, Kosse notes, such as providing sub-par work and creating sub-par products. But when low wages have an effect on worker health, the associated costs have usually not been priced in the market and thus poor worker health “has costs for the whole society.”

In addition to fairness, Kosse notes that policymakers and firms now have another argument for equalizing wages. “It's not just unfair, it also has bad long-run outcomes concerning health,” he says. Getting health costs under control, particularly for industrialized countries, is more relevant as greater portions of the population enter old age. “When our societies get older, stress-related health becomes more important,” he says. “Therefore we should know where heterogeneities in this domain come from.”

The authors note that “coronary heart disease, along with major depression, is estimated to be the leading cause of life-years lost to premature death and years lived with disability worldwide.” For high-income countries the effects are even more stark: coronary heart disease is the leading cause of death. According to the Centers for Disease Control and Prevention, one in every six health care dollars in the U.S. is spent on cardiovascular disease.

As these findings show, unfair pay not only reduces work morale, but can also affect the health status of the workforce. “Our findings provide evidence that the human body registers and systematically processes social and contextual information,” the authors write. Observational data from epidemiological literature that the authors cite suggests “a link between income inequality or low income and bad health status or even death.” As debate continues worldwide about the best ways to solve income inequality, these findings contribute to the argument for more equitable pay.

Thank you to the authors, Dr. Fabian Kosse, Professor Armin Falk, and their co-authors, for their assistance in completing this article.