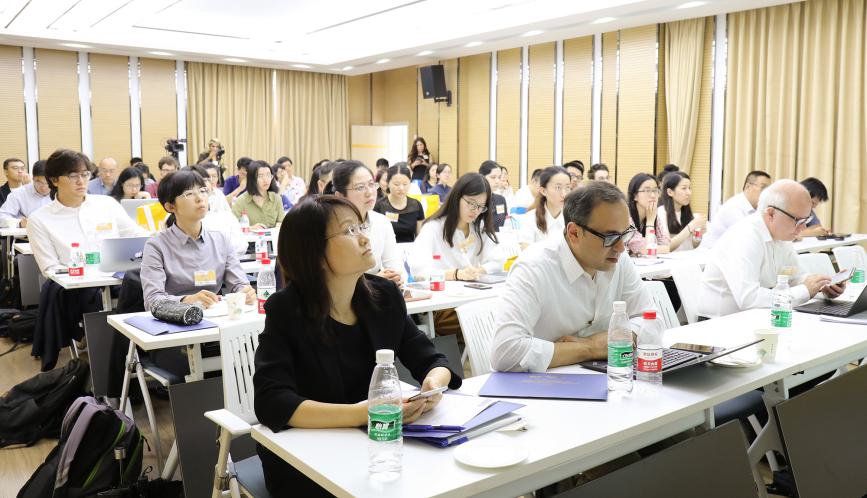 From July 15-19, 51 students from 40 different institutions and 10 countries met at Southwestern University of Finance and Economics in Chengdu, China for the inaugural Summer School on Socioeconomic Inequality program in Chengdu. The conference opened with remarks by Swufe VP of Research and International Affairs Qingshuang Yin, followed by University of Chicago Professor Steven Durlauf, who noted that as China emerges as the leading global economy in the next half century, it will provide immense opportunity for the production of new economic research. Just as the British and American contexts shaped economic thought over the past several hundred years, the Chinese context will play an increasingly important role in informing economic theory. Good economists will need to be versed in the Chinese context. These remarks set the tone for the week’s presentations, which addressed work specific to China.

HCEO Co-Director Steven Durlauf began the conference with a presentation on why social interactions matter in the study of socioeconomic inequality. His first lecture focused on what he calls the memberships theory of inequality. This is the idea that there is a social component to preferences, constraints, and beliefs which lead individuals to choose behaviors that a greater number of their peers are also choosing, a phenomenon called complementarity. This can cause persistent intergenerational inequality as members of segregated groups gravitate towards the average behavior of their respective peers. Durlauf next presented theoretical and empirical considerations necessary within social interactions inequality research. In addition to the standard components of an economic decision model, the social interactions model considers characteristics of an individual’s group and beliefs about what others in the group will do. Key theoretical properties of the social interactions model include multiple equilibria, social multipliers, and phase transitions. These properties allow for sudden discontinuous transitions between social states, such as the “white flight” phenomenon observed in the sociology literature. Durlauf also presented some empirical evidence for the importance of social interactions including ethnography studies, social psychology experiments, and natural experiments. He concluded by highlighting key identification problems in econometric studies, as well as some possible solutions.

Texas A & M and SWUFE Professor Li Gan presented promising results from a recently implemented earned income tax credit type program in China. The program, called the Wutongqiao Experiment, began in 2014 as an attempt to stimulate expenditure among disadvantaged families in the Wutongqiao region. Historically, China has had an incredibly high savings rate and incredibly low social expenditure. Noting that marginal propensity to consume is much higher for the poor than for the rich, the Wutongqiao attempts to stimulate consumption by providing cash rewards for working to disadvantaged families. The pilot group, enrolled in 2014, saw huge treatment effects such as an increase of 105.1 hours worked per month and 0.336 employed persons per household. They also found significant effects on increases in food and education expenditure. The program is currently being scaled up throughout Sichuan province, with more than 72,000 households now enrolled.

On the second day of summer school, Cornell University Professor Larry Blume presented via video conferencing. His lectures focused on the economic theory behind social networks and interactions. Blume began by working through several game theoretic models of social norm formation. The models imply that the strength of social interactions within a population will affect the variance, but not the average behavior of the population. Intuitively, stronger social interactions will reduce variance as more of the population conforms to the average. Blume also discussed several gaps in the current literature, which was useful for students hoping to conduct their own research in this field. He concluded with a general survey of graph theory, introducing various definitions and theorems which students will need to know in order to understand the social networks theoretical literature.

Singapore Management University Professor Fali Huang’s presentation, “Dynamic Interactions between Income Inequality and Political Development,” focused on the interaction between income inequality and the historical evolution of political regimes. She began by noting that in western history, the dominant production factor has evolved from land to physical capital, and most recently to human capital. Correspondingly, the political regime has evolved from monarchy to oligarchy to full democracy. Huang proposed a two-period, overlapping generations model to further study these patterns. Intuitively, she found that whether a political transition occurs peacefully depends on the fighting cost and the strength of the challenging group. Huang next considered the relationship between access to education and political regime. She concluded that as the total knowledge within a society increases over time, education will go through several phases beginning with general education for only the elites and concluding with general education for the masses. This is consistent with the history of western Europe. Huang concluded with a review of the empirical literature focusing on a recent finding that the effectiveness of democracy on the economic growth of a country depends on the country’s economic health at the time of revolution. Weak economies don’t benefit from democracy. Day two of summer school concluded with two poster sessions and office hours.

The third day began with two lectures by University of Wisconsin-Madison Professor Chao Fu, outlining differences between structural and non-structural approaches and the assumptions required for each. She explained that modeling choices should be made to minimize assumptions conditional on achieving the goal of estimation. Structural parametric approaches, while requiring more assumptions, also allow researchers to draw a wider range of informative conclusions. For example, a structural model may allow a researcher to predict the impact of policies outside the range of historical experience. To make these ideas more concrete, Fu explored a series of models of female labor force participation. Fu concluded by illustrating another modeling consideration, individual decision vs equilibrium, and gave examples of questions in education and crime policy for which each approach should be used.

Rice University Professor Flavio Cunha’s lecture, “Human Capital Formation in Childhood and Adolescence,” opened with a presentation of several statistics detailing socioeconomic inequality in the U.S. He proposed that inequality in skills predicts inequality in adult socio-economic outcomes. Cunha presented an abundance of evidence suggesting that inequality in skills appears early in childhood and is likely the result of inequality in investment. This is the rationale behind early childhood intervention programs which aim to correct this inequality. One of the most famous of these, the Perry Preschool Program, resulted in huge benefits to participants, including a reduction in crime and an increase in earnings. Cunha suggested that the success of the Perry Program may be due to its emphasis on promoting the self-control, cognitive flexibility, and working memory of participants. Next, Cunha outlined a model of human capital formation, focusing on two attributes—dynamic complementarity and self-productivity of skills. Cunha concluded by assessing some of the largest problems in the estimation of human capital production models.

On the fourth day, Yale University Professor Mark Rosenzweig gave two lectures, each focused on an empirical study of inequality. His first lecture looked at differences in the distribution of farm size within countries as a way to explain inequality across countries. He began with a review of the literature which suggests an inverse relationship between farm size and productivity. However, using data that oversampled large farms in India, Rosenzweig shows that the productivity of farms increases with farm size after ten acres. This is likely due to the ability for large farms to efficiently use bigger machines. Rosenzweig’s second lecture focused on establishing a causal relationship between educational attainment and obesity. Using a difference-in-differences approach estimated on twins data, he found that a one year increase in schooling significantly decreases BMI. Rosenzweig proposes that highly educated individuals, who have higher incomes, have an increased incentive to be healthy as it allows them to enjoy greater utility from consumption. This suggests that to encourage low income individuals to make healthy choices, it may be helpful to subsidize consumption for which utility increases with health.

Tsingua University Professor Yi Lu concluded Day 4 by reviewing several areas of research attempting to understand and explain the gender pay gap. Evidence suggests that the gender pay gap is decreasing but has not disappeared. Possible explanations include gender differences in psychological attributes, work-family balance considerations, and social norms. Lu reviewed the results of a lab experiment published in 2003 which show that men and women respond differently to competitive environments. Men react strongly to tournament incentives while women do not. This could cause men to perform better in competitive work environments, explaining part of the wage gap. On the final day of summer school, Lu concluded his lecture by reviewing two more studies—one on the penalty women pay for having a child, and the other on the effects of corporate board quota reforms on gender disparities.

For the final sessions of summer school, Chinese University of Hong Kong Professor Junsen Zhang presented a series of statistics on historical income inequality trends in China. Since the economic reforms of 1978, GDP and inequality have both increased dramatically. Zhang explored several possible explanations for this including the adoption of the one-child policy, the implementation of the household registration system (Hukou), and the central exam system (Gaokao). Much of the total inequality can be explained by inequality between urban and rural areas as well as inequality between provinces. Zhang concluded by suggesting areas for potential future research such as examining the effect of genes and human capital investment on driving intergenerational inequality in China. He also highlighted the importance of a more progressive and direct income tax policy. SWUFE Professor and SSSI alum Naibao Zhao and Professor Durlauf provided closing remarks to conclude the week.

We thank our funders, the Institute for New Economic Thinking, for their ongoing support of the Summer School on Socioeconomic Series. We also thank our local partners at the Southwestern University of Finance and Economics and the Research Institute for Economics and Management, including Professor Li Gan, Professor Naibao Zhao, and Professor Junsen Zhang.

This is the first of three SSSI Chengdu programs that will be held at the Research Institute for Economics and Management at the Southwestern University of Finance and Economics.