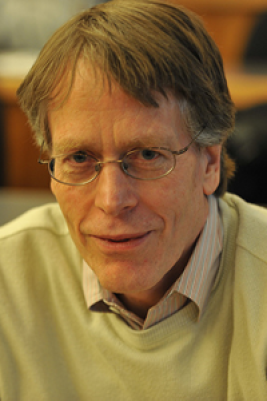 Lars Peter Hansen, an internationally known leader in economic dynamics, is the founding director of the Milton Friedman Institute for Research in Economics. Hansen has been one of the forces behind the development of the Institute. He served as chairman of the faculty steering committee that recommended MFI’s creation and gave it scholarly direction.

Hansen’s work explores formal implications of dynamic economic models in which decision makers face uncertain environments.The main theme of his research has been to devise and apply econometric methods that are consistent with the probabilistic framework of the economic models under investigation.

He devised the Generalized Method of Moments, a powerful statistical framework that empirically addresses how economic agents cope with changing and risky environments. This method offers a powerful tool widely applicable for such uses as testing of asset pricing theories, analysis of macroeconomic power, or the study of market power in economic sectors. This work has profoundly influenced econometric practice in the study of economic dynamics, particularly macroeconomics and finance.

He is the co-author of Robustness (2007), an exploration of robust control theory’s implications for macroeconomic modeling when the decision maker is skeptical that a model can be trusted. He won the 2011 BBVA Foundation Frontiers of Knowledge Award in the Economics, Finance and Management "for making fundamental contributions to our understanding of how economic actors cope with risky and changing environment.s" He is a member of the National Academy of Sciences and American Academy of Arts and Sciences, and past President of the Econometric Society and a fellow of the American Finance Association.